Neither field divisions nor ordinaries need to have straight lines dividing the tinctures. There are several lines of partition available to the herald. The following table shows some of the most common, however modern heralds have invented many other lines of partition including some that resemble fir trees, shamrocks, maple leaves, and other recognizable shapes.

Of all the ordinaries, the cross is by far the most popularly used. This can be attributed primarily to Pope Urban II when he preached that everyone who wished to gain eternal life in heaven should deny themselves, take up their cross, and follow Christ. This sermon was the catalyst for the First Crusade and many who answered that call took those words literally, sewing crosses on their clothing and painting crosses on their shields.

Nevertheless, there are only a limited number of color and line partition combinations available to the ordinary heraldic cross. Therefore, armigers began to make variations in the shape of the crosses on their shields and the heralds then gave each a distinctive name to identify them in their records of blazons. The following table shows some of the crosses that are more typically seen in heraldry.

Although certain animals, such as lions, eagles, bears, ravens, deer and dolphins, appear commonly in heraldry, any animal the armiger wishes may be used. As heraldry has spread around the world, it has become customary to use distinctive local fauna to distinguish the arms of people and institutions. The only limiting factor is the need for the animal to be easily identifiable. Some distinctly unique American animals that can be used in ones armorial are included in figure 11.

The different parts of an animal have specific heraldic names. An animal that has its claws or beak a different color than its body is termed armed. If its tongue is a different color, it is termed langued. For example, a golden lion with blue claws and tongue would be blazoned a lion Or armed and langued Azure. It is, however, generally accepted that animals with red claws and tongue normally do not have this specified.

An animal’s tail is known as its queue and also has different characteristics. If it is knotted, it is termed nowed. If forked, it is fourchée. If it is between the legs, it is known as coward. If only a specific body part of an animal, such as a leg or head, is shown and it is cut with a straight line, it is called couped, but if it is cut with a ragged line it is termed erased. The limbs of a beast are called gambs. Fish and dolphins may be blazoned as finned if the fins are a different color than the body.

Heraldic animals can also be displayed in a variety of positions. The default position of all animals is facing dexter (viewer’s left). If the entire body and head are facing to sinister (right), then it is blazoned as contourné. If the head of the animal is facing the viewer, it is described as guardant, if looking backwards over it's shoulder, it is regardant. The following tables show the most common positions of beasts, fowl, fish, reptiles, and insects.

Human figures are often seen as supporters and sometimes as charges. They are identified by their gender and, if it is important, their nationality or ethnicity. If blazoned as wild, they are shown holding a club in one hand with a ring of leaves around their head and covering their genitalia. Sometimes the figure is shown in armor and is therefore described as armored. Unless the type of armor is specified in the blazon the figure is shown in full plate armor. Human figures that are clothed are blazoned as vested and their clothing is subsequently described. 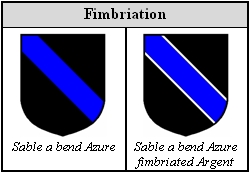 Armigers may also want to highlight a charge by surrounding it by a narrow, detached stripe called a cottice. Cottices were originally a diminutive of the bend—being ¼ the total width of a bend—and were used on either side of the bend. Today, however, many other charges are surrounded by narrow stripes and are blazoned as cotticed. Charges can also be double and treble cotticed, meaning that there are two or three rows of stripes surrounding the charge, respectively. Cottices may be wavy, indented, engrailed, or use any other line of division while the charge they are surrounding remains plain. However, if the surrounded charge uses a line of division, then the surrounding cottices follow that pattern.

There are certain heraldic charges that have special names depending upon their tincture. One variety is circular or disk-shaped and generally known as roundels. The proper heraldic names for the roundels are as follows:

Another of these special charges are drops or gouttes. These are typically used in multiples such as semy (also known as goutty) on a field or as a bordure or an orle. Inverted gouttes—with their points to base—are identified as icicles. The names and meanings for gouttes are as follows:

In addition to those listed above, an armiger has an almost limitless supply of other charges he or she may use. The only limits are his or her imagination, good taste, and the need for the charge to be identifiable. One might choose to use a plant as a charge. If he or she wanted to allude to their American background, they might use one of the charges listed in figure 12 or any other easily identifiable local land