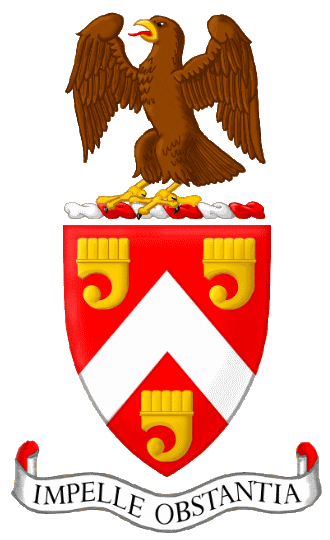 The Arms Used by Chester A. Arthur

Arms: Gules a chevron Argent between three rests (clarions) Or.

Crest: A falcon rising proper belled and jessed Or.

The President and the Arms of Arthur

When John Adams directed his wife to paint over the family arms on the door of her carriage to preclude allegations of elitism, just before his 1797 inauguration, he set a pattern of personal heraldic reticence that virtually every President for the next century would follow until Theodore Roosevelt unapologetically revived the display of armorial bearings while in office at the dawn of the 20th century. One of the few exceptions to this pattern was Chester Alan Arthur, who unexpectedly found himself President after the assassination of James Garfield. Garfield himself had possessed a coat of arms, which had been researched by a distant cousin, but like several predecessors who may have had a claim to armorial bearings was either too modest or too politically astute to be ostentatious about using it while he was President. Arthur turned out to be less reserved, or perhaps less astute, and paid the price for it.

Although he actually was born in a log cabin, President Arthur would have nothing to do with the kind of rough-hewn image cultivated by his immediate predecessors. He was a wealthy, well-educated man and lived like one. Indeed, he had a reputation as something of a dandy. He dressed expensively and stylishly, entertained lavishly at his own expense, and insisted on a complete refurbishment and redecoration of the White House before moving in following Garfield's death. He kept a well stocked wine cellar and a French chef and provided the White House domestic staff with elegant livery suits of "imperial blue." Perhaps the expression of Arthur's personal style that was most visible to the general public could be found in his transportation arrangements. As Gilson Willets observed in 1908:

Of the later Presidents, Mr. Arthur probably possessed the finest array of horses and carriages. His landau was painted a dark green trimmed with red. It was drawn by two exquisitely matched horses of dark mahogany color. Silver mountings were conspicuous in the harness. All the lap robes of the coachmen were decorated with the President's monogram. The one used by the President inside the carriage was of Labrador otter.

And prominently painted on the side panels was what purported to be the President's coat of arms, red with a white chevron and three golden heraldic charges generally known as "clarions," but sometimes also called "rests." The origin of this object has long been a matter of speculation and debate among heraldic scholars, with James Parker's Glossary of Terms Used in Heraldry (1894) suggesting that it is most probably a spear-rest, while John Woodward's Treatise on Heraldry (1895) insists that "no such contrivance" ever existed, and that it is most likely a type of musical instrument similar to a Pan's-pipe.

Arthur also used the arms
on his bookplate.
Courtesy of Lew Jaffe

In any case, this shield, with its crest of a rising falcon, was recognized throughout Washington as President Arthur's personal insignia. The Washington Post even mentioned it in a story about the President's departure for a visit to New York: "The well known coupe with its coat of arms, drawn by four blooded horses, came dashing around the corner."

Unfortunately, for all his use of them, the arms did not legitimately belong to President Arthur, a fact that became a major embarrassment when the time came for the 1884 election campaign. As the Republican convention approached, Joseph Pulitzer's New York World published a picture of the arms used by the President with the revelation that the arms were really those of a prominent Irish family to which the President was completely unrelated. They had simply been lifted, the newspaper charged, from Sir Bernard Burke's Genealogical and Heraldic History of the Landed Gentry. In short, the President of the United States was using what the World called "shoddy arms," an adjective that at the time would have had been clearly understood as alluding to the poor quality uniforms sold to the Union Army by dishonest suppliers during the Civil War.

The World's agenda was transparently political--the paper was strongly Democratic--but clever nonetheless. Simultaneously the President was portrayed both as a snob for using heraldry at all and as a fraud for using arms that belonged to someone else. As if that were not enough, the World claimed that the President's own father had written a book tracing the family to British roots, and here it turned out that the arms were actually Irish. The clear implication was that Arthur was Irish but ashamed of it, simultaneously putting him in a negative light with Irish-Americans as well as those of anti-Irish persuasion. Now as it happened, the Reverend William Arthur's book, published more than 30 years earlier, said nothing about his own family's ancestry at all, but was rather an Etymological Dictionary of Family and Christian Names. Moreover, its identification of the name Arthur as "British" actually meant it was of British Celtic origin, not that it was English. But the sensationalistic World was not a newspaper to let such facts get in the way of a good story.

The speciousness of that part of the case notwithstanding, the World had the story right on the heraldic front. The arms Arthur was using were indeed in Burke's Landed Gentry, where they were listed as belonging to Thomas Arthur, Esq., of Glanomera in County Limerick, scion of an Anglo-Irish house that had been prominent since the time of Elizabeth I, when two Arthurs had represented Limerick in the Irish Parliament. While there may have been a very slim chance that the President was related to this house at some point in the remote past, there was certainly no evidence to that effect that could have justified the purloining of the Glanomera arms. On the contrary, everything unearthed to date on Chester A. Arthur's ancestry can take his line no further back than his great-grandfather, Gavin Arthur, who was born in 1735 near Ballymena in County Antrim, Ulster, far from Limerick and the Arthurs of Glanomera.

As it turned out, the scandal, such as it was, probably had little effect on the 1884 election. Much more political hay was made over Arthur's fashionable wardrobe and elegant dinners (all paid for out of his own pocket) than over his heraldic misdeeds. Even more importantly, Arthur's strong support for civil service reform--surprising in a man of an impeccable machine-politics background--had alienated many within the Republican Party who resented the loss of political spoils. When the convention took place in June, Arthur was repudiated by the party in favor of his former Secretary of State, James G. Blaine.

The heraldic lapse was one of Arthur's rare deviations from absolute probity during his term as President. Given his otherwise honorable behavior in office--widely noted by his contemporaries precisely because it was so unexpected given his prior career--maybe we can write off this sad breach of heraldic etiquette as the result of ignorance. But it must be noted that the disclosures of the spurious provenance of the arms did not end their use; not even the former President's premature death less than two years after leaving office did that. Perhaps in a manifestation of the sheer defiance expressed by the motto Impelle obstantia--"thrust aside obstacles"--a similar version of the arms which also belonged to an unrelated family (with an ermine rathe

Official Heraldry in the Arthur Administration

A word should be said about the use of official heraldry in the Arthur Administration, which saw two important innovations. The first, in which the President himself seems to have had no direct role, was the redesign of the U.S. great seal that began in 1883. This work led to the standardization of the national coat of arms in the form we know it today.

By contrast, the President was intimately involved in the other, the adoption of the first flag designed uniquely for the President's use. This flag, which was personally approved by Arthur before it was officially introduced by Navy Department General Order 300 of August 9, 1882, consisted of "a blue ground with the coat of arms of the United States in the center." As illustrated in the Navy's 1882 edition of Flags of Maritime Nations, the eagle was shown all in white, the shield in full color with 13 white stars on the chief and seven red and six white stripes instead of the correct six red and seven white. The crest took the form of an arc of thirteen white stars above the eagle's head. Despite subsequent changes in detail, this flag is the direct precursor of the one with which we are familiar today.