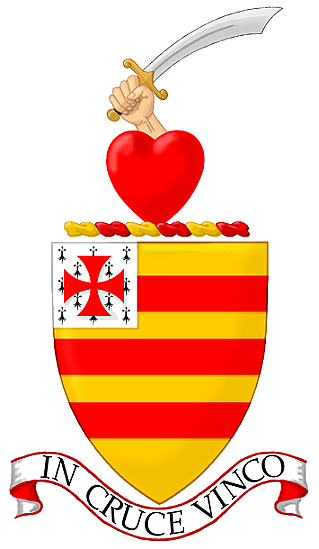 The Arms of James A. Garfield

Arms: Or three bars Gules on a canton Ermine a cross paty Gules.

Crest: Issuant from a human heart a dexter hand holding a sword proper.

Motto: In cruce vinco (In the cross I conquer).

The Arms of a Fallen Chief of State

On September 19, 1881, six months after his inauguration and 80 days after being gunned down in a Washington train station by a disgruntled failed office-seeker named Charles Guiteau, President James A. Garfield died at Elberon, New Jersey, the second President to succumb to an assassin's bullet. Immediately the oratorical tributes and laudatory biographies began to appear, all predictably focusing on Garfield's remarkable rise from a log-cabin childhood in Ohio, raised by a widowed mother, to a professorship of classics, a commission as major general of volunteers in the Civil War, a seat in the U.S. House of Representatives, and finally, in November 1880, election as the 20th President of the United States.

Somewhat more surprisingly, most of these tributes made mention of something that would have been kept quiet in regard to earlier log-cabin Presidents: Garfield's possession of a coat of arms. What is perhaps even more telling about changes in public attitudes toward personal heraldry in the United States is that most of the written accounts of the arms derived from two campaign biographies originally written in 1880, William M. Thayer's From Log-Cabin to the White House: The Story of President Garfield’s Life, and Russell H. Conwell's The Life, Speeches, and Public Services of James A. Garfield. Between them, the two accounts enable us to picture what the President's arms looked like. Thayer is the less intelligible of the two:

The Garfield coat-of-arms consisted of a shield, with a gold ground, three horizontal crimson bars crossing it in one corner, over it a helmet with raised visor, together with a heart, and above the whole an arm wielding a sword, on which was inscribed the motto, In cruce vinco—“Through Faith I Conquer.”

Conwell does a little better:

It had three horizontal bars of red on a field, or background, of gold in the center of the shield, and a red Maltese cross on an ermine canton or corner piece. The crest consisted of a helmet with the visor raised, and an uplifted arm holding a drawn sword. For a motto were the words: "In cruce vinco," (by the cross I conquer).

Thayer and Conwell, as well as those who plagiarized their accounts in many of the posthumous tributes, took special note of the pious sentiment expressed in the motto, clearly one they wished readers to associate with the President. But with interest in genealogy reviving in the United States in the latter 19th century, they also wanted to convey that Garfield was of old Anglo-Saxon and New England Yankee stock. As Conwell put it, the coat of arms "goes far to confirm the previous conclusion that the Garfields were a martial family of wealth and influence in the days of Queen Elizabeth and perhaps in the Crusades."

The Origin of the Garfield Arms

In fact, the arms do no such thing, but, from a heraldic point of view, have a much more interesting story behind them than if they had indeed meant what Conwell thought.

James Garfield had been aware of his arms for many years before his rise to the Presidency. In 1872, in response to a letter about the family genealogy from his kinsman E. I. Garfield, the then-Congressman provided detailed information on his ancestry as he knew it, including the statement: "I have seen the family crest to which you allude in your letter. It was shown me some time ago by the Rev. John Garfield, of New Haven, Connecticut, and I have since seen it in a book of English heraldry. If you have a spare copy of the cut [i.e., the engraved metal printing plate], I should be glad to receive it."

The plate was duly sent as requested, but where did these arms come from? Were they simply the concoction of a heraldry merchant, the arms of some other family of Garfields to which James Garfield had no right? Or were they in fact his arms by right of descent?

The Reverend Edward G. Porter, who reported the exchanges between the two Garfields to a meeting of the Massachusetts Historical Society in 1881, traced the President's ancestry back to an Edward Garfield, whom he believed had come from the English county of Chester to Watertown, Massachusetts, in about 1635. A few years later, however, William F. W. Phillimore presented a paper to the New England Historic Genealogical Society investigating the Garfield family in the mother country, and determined that Edward Garfield had not come from Chester at all but, based on circumstantial evidence, was most likely from a family located in and around the villages of Kilsby and Ashby St. Leger in Northamptonshire.

The heraldic implications of this conclusion are quite important. Phillimore discovered that a man named Benjamin Garfield, of Tuddington, Middlesex, had claimed a right to a coat of arms during the heraldic visitation of that county in 1663. The visitations were a system of occasional tours by officers of the College of Arms, conducted under royal commission, for the purpose of enforcing royal control over heraldry, styles of address, and related matters. Those claiming a coat of arms were required to show evidence of their right to the arms, either by producing a record that the arms had previously been granted or confirmed by the officers of arms or by demonstrating (through the presentation of old seals, tombstones, church windows, family silver, and the like) that the arms had been in use in their family for an extended period of time. At the time Benjamin Garfield submitted his arms, he would have had to show use of the arms dating back to the early part of Queen Elizabeth I's reign in the previous century for his arms to be confirmed on the basis of ancient user. 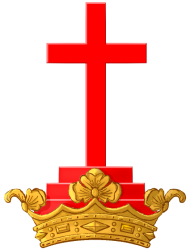 The arms that Benjamin Garfield presented for confirmation in 1663 were divided quarterly, with the first quarter, representing the paternal Garfield line, being heraldically identical to the arms on the steel plate that E. I. Garfield sent to James A. Garfield more than 200 years later. The only difference was that the crest claimed in 1663 was out of a crest coronet, a cross Calvary Gules rather than issuant from a human heart a dexter hand holding a sword proper, as provided by E. I. Garfield in 1872. Moreover, the pedigree submitted with the arms identified Benjamin Garfield as the grandson of Ralph Garfeild of Kilsby, Northamptonshire--one of the villages from which the Watertown line of Garfields had apparently sprung.

Benjamin Garfield was not able to persuade the visiting heralds of his right to the arms. But his case must have had some credibility, because rather than requiring him to disclaim the arms outright, they "respited" the arms, meaning that the matter was referred back to the College of Arms in London for a review of the records there and to give Garfield an opportunity to present further proof. Apparently, however, the issue was never followed up, as no subsequent record of confirmation or grant of the arms has ever turned up. Perhaps Benjamin couldn't come up with the required £30 fee, or didn't care to. In any case, the failure to follow through meant that the Garfield arms were not lawful, by strict construction of the English law of arms as interpreted by the heraldic establishment. But since Edward Garfield and his children were already settled in New England by the time the arms were officially examined, and since there were no visitations in America, the Garfields of Watertown could well have taken them to Massachusetts and kept using them unmolested for the next 200 years and more.

But did they? Unfortunately, the waters are muddied by the fact that these arms, both the version with the cross Calvary as the crest and the one with the hand and sword emerging from the heart, are listed in an 1830 heraldic dictionary, Thomas Robson's The British Herald or, Cabinet of Armorial Bearings of the Nobility & Gentry. Absent any physical or documentary evidence that the arms were actually used by the President's ancestors in the New World between their arrival and the early 19th century, one must reluctantly concede that someone in the Garfield family probably just found them listed in Robson or a similar volume and used them on that basis. If so, however, it is a happy coincidence that they chose the arms of a Garfield family with which they may well have shared a common ancestry, and to which they therefore had at least a plausible right.