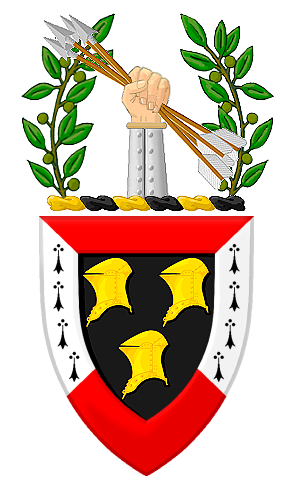 The Arms of John F. Kennedy

Arms: Sable three helmets in profile Or within a bordure per saltire Gules and Ermine.

Irish Arms for an American President

On St. Patrick's Day, March 17, 1961, an unprecedented ceremony took place at the White House when the ambassador of the Republic of Ireland, T. J. Kiernan, presented President John Fitzgerald Kennedy a splendid, hand-illuminated sheet of vellum signed by Gerard Slevin, Chief Herald of Ireland, announcing "to all to whom these Presents shall come" that the Irish government had granted a coat of arms to President Kennedy "and the other descendants of his great-grandfather Patrick Kennedy." Never before had a foreign sovereign made such a grant to an American President.

The design of the arms was a combination, in altered form, of the emblems historically associated with the Irish names of Kennedy and Fitzgerald, the President's paternal and maternal lines. The main field of the shield, black with three golden knights' helmets, comes from the arms of O'Kennedy (Ó Cinnéide) of Ormonde, Sable three helmets in profile Argent. This field is surrounded by a bordure divided per saltire (i.e., in the shape of an X), with red in the upper and lower quarters and ermine in the flanks, an allusion to the arms of the Fitzgerald Earls of Desmond, which are Ermine a saltire Gules. The crest, an armored arm with the hand holding four arrows, surrounded by two olive branches, was inspired by a passage in President Kennedy's first State of the Union address a few months earlier. "On the Presidential coat of arms," Kennedy had said, "the American eagle holds in his right talon the olive branch, while in his left is held a bundle of arrows. We intend to give equal attention to both." Although not officially stated in the Chief Herald's explanation of the design, the number of the arrows is usually interpreted as symbolizing the President and his three brothers, Joseph (who had been killed in World War II), Robert, and Edward (Ted). No motto was assigned by the Chief Herald, it being felt that the choice of a motto should be a personal matter for the bearer of the arms.

Fully conscious of the historic nature of the event, Dr. Slevin's office had spared no effort to ensure that the presentation was of the highest possible quality. Not only were the "letters patent" beautifully lettered and painted, complete with the pendant seal of the Chief Herald, but the document was presented in a specially made box lined with blue Irish poplin, on which was embroidered in gold thread the harp of Brian Boru, the emblem of the national arms of Ireland.

It was only the distinction of the recipient that was unusual about this grant, however. Starting in the early 20th century, Ulster King of Arms, the head of the Irish heraldic establishment under British rule, had begun granting arms to Americans of Irish descent, a practice that was continued following independence by Ulster's successor in function, the Chief Herald of Ireland. Thus it was on the basis of President Kennedy's descent from Patrick Kennedy, who emigrated from County Wexford to Boston in 1845, that an application for a grant of arms was lodged on his behalf and subsequently approved.

The Kennedy Arms in Use

The Kennedy family was evidently highly pleased with the arms granted by Chief Herald Slevin. Two months after the presentation ceremony, Mrs. Kennedy surprised the President on his 44th birthday, May 29, with a gold signet ring engraved with the full achievement of the arms. This ring is now housed in the collections of the John F. Kennedy Library in Boston. (The photograph below, courtesy of the Kennedy Library, shows the arms in their normal depiction; ordinarily a signet ring would be engraved with the arms in mirror image, so that the wax impression left by it would show the arms correctly.) 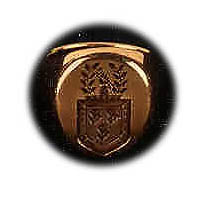 The arms received much greater publicity a few years later, appearing in flag form in both Life and National Geographic magazines in 1965. After President Kennedy's assassination on November 22, 1963, the Canadian government honored his memory by naming the highest then-unclimbed peak in North America after him. In March 1965, the National Geographic Society launched an expedition to climb the 13,904-foot Mount Kennedy, with the President's brother, Senator Robert F. Kennedy, playing a prominent role. Days before the expedition was to depart for the Yukon, it was decided that a banner of the Kennedy arms should be planted on the summit. Walter Angst, a heraldic artist in Maryland, was commissioned to produce the banner overnight on the night of March 13. With no time for elaborate stitching, Angst painted the design on a 25 by 25 inch cloth. Above the square banner, Angst attached a long white pennant—called a Schwenkel in German heraldry—bearing the arm, arrows, and olive branches of the crest. Senator Kennedy personally carried the flag with him to the summit, planting it there on March 24, only ten days after Angst finished making it. Expedition leader James W. Whittaker would write about the moment in the July 1965 National Geographic:

Bob walked up to the summit, and he stood there about five, ten seconds, and reached back over his shoulder, just the way I had reached back for my American flag on top of Everest. I remember thinking of that when he reached back, without looking. He groped for it, felt it, and pulled out the pole around which was wrapped the Kennedy flag and streamer. He jammed it into the snow. Senator Kennedy stood there alone, silent, looking down. He made the sign of the cross. It was his brother’s peak, and he stood there a long time.

Several photographs of the Kennedy banner atop Mt. Kennedy are posted on Sebastian Nelson's web page about the banner.

Today, the Kennedy arms are still used not only by members of the family, but by the aircraft carrier named in the late President's honor in 1964, christened by his daughter Caroline in 1967, and placed in commission in 1968. The USS John F. Kennedy (CV 67) carries on its official seal the arms, Sable three helmets in profile Or within a bordure per saltire Gules and Ermine, placed between two gold wings symbolizing naval aviation. Below the shield, two dolphins support a scroll on which is inscribed the ship's motto, Date nolite rogare, "Give, be unwilling to ask," an allusion to the President's famous words, "Ask not what your country can do for you; ask what you can do for your country."

The grant of the Kennedy arms, as mentioned above, was not only to President Kennedy but to all the descendants of his great-grandfather Patrick Kennedy. Irish arms, like English arms, typically descend to all descendants of the original grantee through the male line, but the old custom, at least in British heraldry, is that all male descendants except the senior member of the senior surviving male line should "difference" the arms for cadency, thus ensuring that no two living men bear the same arms. (Traditionally, women do not difference for cadency and all inherit their fathers' arms in the same form he bears or bore them.) The representative of the senior surviving male line of the descendants of Patrick Kennedy seems to be Joseph Patrick Kennedy II (born 1952), son of Senator Robert Kennedy.

In practice, however, as the Oxford Guide to Heraldry points out, differencing for cadency is seldom strictly observed even in England, and even when the terms of the original grant call for it. Some Irish grants do stipulate that the arms are to be inherited by all descendants "with due and proper differences," but this phrase is not included in the Kennedy grant. The arms may therefore be used not only by Joseph Patrick Kennedy II but also by his brothers, sisters, and cousins, at least those bearing the Kennedy name. While adding cadency marks might be in accordance with tradition, doing so would be entirely voluntary.

3.2  Why doesn't the mantling match the main tinctures of the arms?

Some have claimed that the Kennedy arms are usually depicted incorrectly, because the colors in the crest wreath, or torse (the small strip of twisted cloth upon which the crest is mounted) do not match those of the mantling, the slashed cloth hanging from the helmet and framing the shield. In fact, although the modern norm in England and Scotland is for both the mantling and the torse to match the principal color and the principal metal in the shield, there is a long history in both Ireland and Scotland of mantling being granted in the tinctures Gules doubled Argent (red lined with white) regardless of the color of the shield, and this is still the standard practice in Ireland. According to a conversation with an official of the Office of the Chief Herald, as reported by Carl Pritchett on the AHS message board on November 30, 2005, the use of mantling Gules doubled Argent "is the tradition of centuries in this Office though there is no objection, in principle, to using the main colour and metal of the shield."

3.3  If the arms are granted to all descendants of Patrick Kennedy, why is there a bordure representing the Fitzgeralds? Was Patrick also a Fitzgerald on his mother's side?

Not as far as we know. It is quite common, when heraldic authorities in Britain and Ireland make grants in honor and memory of an applicant's ancestor, for the design to reflect the life and interests of the applicant more than those of the ancestor being honored. It can be argued that this is undesirable, as it saddles other descendants of the ancestor with symbolism that may have nothing to do with them. On the other hand, they are always free to apply for arms of their own with a different design or--in the case of Americans--to adopt new arms of their own design without reference to a foreign authority.

3.4  How could an American President accept a coat of arms from the Republic of Ireland? Doesn't the Constitution forbid American government officials from accepting titles from foreign governments?

The Constitution does indeed provide that "no Person holding any Office of Profit or Trust under [the United States] shall, without the Consent of the Congress, accept of any present, Emolument, Office, or Title, of any kind whatever, from any King, Prince, or foreign State." But a grant of arms is neither an office nor a title, nor, in the Irish view, does it imply a social rank or entail the conferral of an honor from the state. Finally, since arms cannot be sold, they have no monetary value beyond that of the vellum on which the arms are emblazoned.