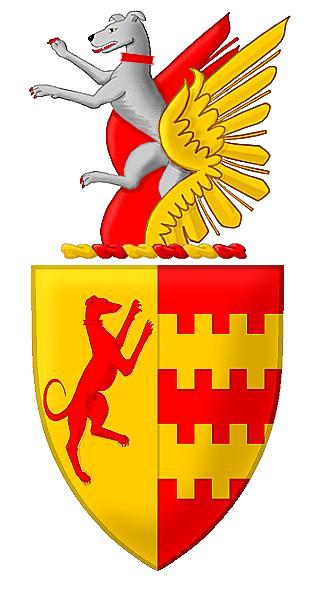 The Arms of Martin Van Buren

Arms: Per pale, Or a greyhound rampant contourny Gules, and Gules two bars embattled-counterembattled Or.

Crest: A greyhound rampant between the wings of a vol Gules and Or.

Perhaps it just seemed natural that Martin Van Buren would have been a flamboyant user of armorial bearings. After all, no less than Thomas Jefferson's daughter, Martha Jefferson Randolph, described him as “the rich, high-born Mr. Van Buren,” and as one of the two most elegant men in the United States. Another person who knew him said he was “as polished and captivating a person as the social circles of the United States have ever known.”

His political opponents were just as impressed by Van Buren's style and elegance, although much less favorably. As the hand-picked successor to Andrew Jackson, his high-living seemed to many Democrats a betrayal of the Jacksonian legacy; to Whigs, the apparent gap between Democrats' common man rhetoric and their leaders' lifestyles was both a matter of amusement and a vulnerability to be exploited with great success. Van Buren's next successor but one, John Tyler (who succeeded to the presidency when William Henry Harrison died a few weeks after taking office), is known to have joked with a friend about the display of armorial bearings by one of Van Buren's cabinet officers. The campaign biography of the next Whig president, Zachary Taylor, explicitly contrasted his modest conveyance with "these high-backed, four-horse, soft-cushioned, coat-of-arms panelled affairs, such as Martin Van Buren imported from England to ride in when he was President."

It was ironic, of course, that Van Buren could have been portrayed so successfully by his rivals as an aristocrat, out of touch with the common man, considering that his origins were far more humble than the rivals' own. Harrison and Tyler were both scions of the James River plantation gentry of Virginia--Harrison's father was a signer of the Declaration of Independence and his more remote ancestors had been members of Virginia's House of Burgesses and Royal Council going back into the early 17th century. By contrast, despite his aristocratic-sounding surname, Martin Van Buren was the son of a tavern-keeper. His immigrant ancestor, Cornelis Maessen, came to America as an indentured servant in the employ of Kilian Van Rensselaer, owner of the greatest of the feudal estates of the colony of New Netherland. In fact, his name wasn't even "Van Buren." In the 17th century, the typical Dutch peasant had no family name; he would be known simply by his given name and patronymic, i.e., his father's name followed by the suffix "-sen." Thus, Cornelis Maessen was Cornelis, the son of Maes, a shortened form of Bartolomaes or Thomaes. On most official records, Cornelis was referred to as Cornelis Maessen van Buurmalsen, but this wasn't a surname either, merely a statement of his place of origin, the village of Buurmalsen in the Dutch province of Gelderland. But because Buurmalsen lay within the Gelderland county of Buren, he was also sometimes described as "van Buren"--"from Buren." Over time, it was this formulation that came to be used as the family name of Cornelis Maessen's descendants.

But Did He Really Use a Coat of Arms?

While the Netherlands has never restricted the right of anyone to adopt and bear a coat of arms of his own choice, it would have been very unusual for someone of Cornelis Maessen's modest estate to do so, and in fact there is no evidence whatsoever that either he or any of his descendants up until President Martin Van Buren ever did so. Another descendant, Augustus H. van Buren, wrote facetiously that Cornelis Maessen's "coat of arms must have been an axe, a shovel, a pick, a hoe and a flint lock."

So if Cornelis Maessen had no arms, and none of Martin Van Buren's forebears used arms, where did the arms supposedly displayed on his carriage come from? Did he, in fact, even use such arms at all? If so, he apparently did not use them on his bookplate, generally a favorite item for the display of heraldry by those who bore coats of arms at the time. Instead, Martin Van Buren's ex libris seems to have been just the inscription "M. V. Buren" in copperplate script, adorned with a simple festoon above it.

Yet Van Buren's biographers, whether critical or admiring, seem to have accepted such accounts of his flaunting of heraldry at face value, either condemning or apologizing for it as their views of his career demanded. Thus Edward Booth would write (1947), “If he lived in grand style and sported armorial bearings, the Kinderhook democrats forgave him, perhaps secretly and vicariously shared in such glories. He was one of them who had risen above the great landed Federalist families. Let him wear this royal feather in his liberty cap if he must.”

A Visit to the King

Van Buren's biographers, both the sympathetic Booth and the viciously hostile M. Holmes Alexander, agree on one thing: that the former President received a coat of arms from the King of the Netherlands. Booth says "the King of Holland eventually granted Van Buren a coat of arms of the Counts Buren." Alexander (who explicitly blames Van Buren for everything unsavory in American political history since his time) writes that "when the last election was over and lost, the ex-President quietly returned to the King of Holland and procured himself a dazzling coat-of-arms to hang on the wall at Lindenwald," Van Buren's house in Kinderhook, N.Y.

The idea that the King of the Netherlands would grant Van Buren the arms of the Counts of Buren is wholly implausible, and in fact there is no evidence to support it. In the first place, the king was himself the Count of Buren and would not have granted the arms associated with that title to someone else, particularly someone unrelated to the Buren lineage. Everyone, including Martin Van Buren, knew perfectly well that he was not kin to the Counts of Buren. As the former president wrote in his unpublished memoirs:

I spent a few weeks in Holland, after the abrupt close of my brief mission to England in 1832, and was very kindly received by the King, William I. He informed me that a gentleman of my name was at one time Minister of Foreign Affairs under one of his ancestors; that the name was derived from the town of Buren, in the neighbourhood of Utrecht, which was formerly an Earldom, and from which by the marriage of one of his forefathers, he derived one of his present titles – that of Count Buren. Of the fact which he suggested that my family was from the same stock I have neither knowledge or belief, nor, I may add concern, nor do I feel any temptation to claim family relationship with a branch of the Van Burens of Holland as the family is literally extinct, even though its head had the honor of connecting her name with that of Nassau.

During the same visit, Van Buren is said to have answered the queen's inquiry as to how far back he could trace his genealogy by saying "As far back as Kinderhook, may it please Your Majesty."

In the second place, if the king had indeed granted arms to former President Van Buren, there would be a record of it in the Dutch archives. Yet inquiries to the Netherlands Royal House Archives, Royal Library, High Council of the Nobility, and National Archives, and the Nederlandse Genealogische Vereniging (Netherlands Genealogical Association) by Sebastian Nelson, a regular participant in the American Heraldry Society forums, all turned up no record of such a grant.

Finally, the arms that hung at Lindenwald--whether or not Martin Van Buren ever displayed them anywhere else--are not those of the Counts of Buren. The counts bore Gules a fess embattled-counterembattled Argent, red with but a single embattled horizontal stripe, similar to those in the sinister half of the arms shown above, but one instead of two and silver instead of gold. However, the Lindenwald picture is identical to the blazon of the family of Chais van Buren in Jean-Baptiste Rietstap's great Armorial Général, a collection of tens of thousands of armorial bearings, published in Gouda in 1861:  Parti au 1 d'or au lévrier rampant et contourné de gueules au 2 de gueules à deux fasces bretessées et contre-bretessées d'or; Cimier le lévrier rampant entre un vol de gueules et d'or. They also resemble the arms used by another family of Van Burens in New York, the descendants of Dr. Johannes Van Buren, born in Amsterdam in 1678, who immigrated to New York in about 1700. These arms replace the greyhound in the dexter half of the arms shown above with what appears to be a red fox, and use a demi-fox Gules, without any wings, as the crest.

So where did the Lindenwald arms come from? Another descendant, Harriett Van Buren Peckham, offers the most authoritative--although still incomplete--explanation in her 1923 History of Cornelis Maessen Van Buren, apparently the source from which Alexander, Booth, and others spun their theories of a royal grant:

The years of 1853-1855 he spent in foreign travel, and it is related that while in Holland he was received in audience by the then King of Holland, and given a drawing of the Coat-of-Arms, which is the frontispiece of this book. These Arms are remembered by persons still living as having hung on the wall of the hall at Lindenwald, and one of the grandsons told one of his cousins of the incident and this cousin gave to the Editor a cut of the arms.

Thus what Martin Van Buren got in the Netherlands was not a grant of arms but merely a drawing of a coat of arms associated with the Van Buren name. And while Mrs. Peckham implies that it was a gift from the King, one could parse the words carefully to conclude that it was simply a gift from someone unspecified--the ex-president was received by the king, and he was given a drawing of the arms, but not necessarily at the same time.

This is still not a completely satisfactory explanation. It doesn't account for the 1848 description of Van Buren's having driven around Washington in a carriage with armorial panels--if the story was true--and it doesn't explain why the particular version of the arms with the greyhound and two embattled bars was chosen. Presumably an armorial stationer in Amsterdam would have been aware of these arms, even though they had not yet been published by Rietstap, but why those and not some other blazon used by some other equally unrelated family of Van Burens?

In any case, the one thing we know is that former President Van Buren did possess a coat of arms--or at least he possessed a painting of a coat of arms--and that he displayed it in his house if nowhere else. 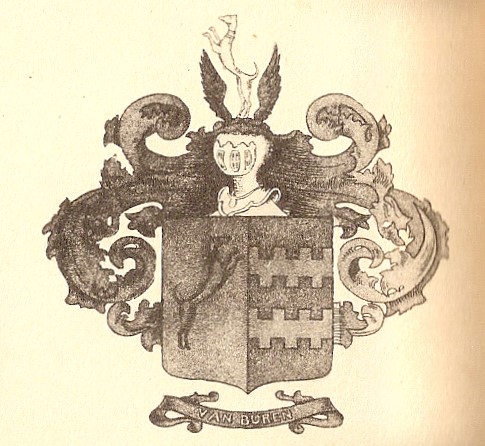