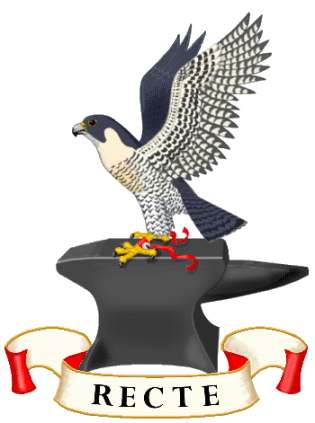 The Heraldic Badge of Rutherford B. Hayes

Badge: Upon an anvil a falcon rising proper.

A President Designs a "Crest"

The late 19th century in the United States saw a curious shift in attitudes toward heraldic usage by American public figures. Only a few decades before, the bearing of heraldic arms by politicians had been a matter of derision, if not worse. Yet the years after the Civil War were, for a variety of reasons, a period of rising interest in heraldry. Thus it does not seem to have come as a total surprise to the White House staff when a letter dated December 27, 1879, arrived from the New York stationery firm of Dempsey and Carroll asking, "Can you send us President Hayes coat of arms if so you will greatly oblige us." Perhaps Messrs. Dempsey and Carroll had read in Hayes's campaign biography published three years earlier that "The Hayes family, in its prosperous days, before any of its descendants ever visited this country, and before the intermarriage with the Rutherfords, had for a coat-of-arms a shield, barred and surmounted by an eagle in the act of flying."

The President seems to have mulled the request over for some time; it is not even clear whether he ever responded. He did, however, express his thoughts on the matter in his diary on July 13, 1880:

I have been asked for my crest. In honor of my ancestors, according to the Hayes traditions, and especially of my grandfather, a blacksmith, and my great-grandfather, a scythe-maker, why not say?
Crest - A falcon displayed sitting on an anvil, the right side of the anvil supported by a scythe and on the left side by an ox-yoke. Motto (under the anvil), Recte.

A note in his handwriting in the files at the Hayes Presidential Center at Spiegel Grove in Fremont, Ohio, probably from the same period, shows him working through the blazon: "Crest - an old fashioned anvil (abt 1776) thereon a falcon rising on wings elevated.  Supporters Right of Anvil supporting a ploughshare - left side an ox yoke. Motto - Recte - under the anvil." [Note: underlined passages in this transcription are inserted above the lines with carets in the original; passages lined through in this transcription are lined through in the original.]

Where did this design come from? Years later, the then-former President explained to an old Union Army comrade:

No American - almost none - has any right according to Heraldy [sic] to a coat of arms - a crest - or a motto. To assume it is snobbery. The thing has been prepared, however, for the Brattleboro [Vermont] branch of the Hay, (as it is in Scotland), or the Hayes family, (as the English have it,). The falcon whose flight, according to tradition, determined the area of the estate conferred with rank for the valor of the first of the name, rested at the end of it on a rock on the banks of the Taj [sic--correctly "Tay"] in Perthshire. Hence the coat - a Falcon just lighted, with wings still spread, on a rock. Hence with Grandfather and Gr. Grandfather both village blacksmiths, our Falcon sits on an anvil.

While most modern American heraldists would reject the contention that it is snobbish for Americans to assume a coat of arms, Hayes's statement did reflect the generally accepted view among the leading American heraldic writers of the time. Moreover, the President had done his homework on the legends surrounding the heraldry of his supposed ancestors, the powerful Scottish house of Hay, Earls of Erroll. Besides the falcon, this connection to the Scottish Hay family explains the apparently curious inclusion of the ox-yoke as a "supporter" in Hayes's original composition. The eminent Scottish heraldist Alexander Nisbet tells the story:

In the reign of King Kenneth III, about the year 980, when the Danes invaded Scotland, and prevailing in the battle of Loncarty, a country Scotsman, with his two sons, of great strength and courage, having rural weapons, as the yokes of their plough, and such plough furniture, stopped the Scots in their flight in a certain defile, and upbraiding them of cowardice, obliged them to rally, who with them renewed the battle, and gave a total overthrow to the victorious Danes.

The king is therefore said to have ennobled the man and his sons, and in addition to granting them a coat of arms and the falcon crest as described by Hayes, he also prescribed for supporters "two men in country habits, holding the oxen yokes of a plough over their shoulders."

Although Hayes may have seemed a bit apologetic about his venture into heraldry, and despite the fact that he and others often described his composition as a "coat of arms" or "crest," in fact it was neither of those, lacking the one essential ingredient of a coat of arms: a shield. It is actually more accurately described as a badge, a heraldic emblem that stands alone as a mark of a person or family, usually of secondary importance to the coat of arms.

Badge of Rutherford B. Hayes
on Spiegel Grove notepaper

Badge of Rutherford B. Hayes
on Spiegel Grove notepaper

Apparently Hayes took no definitive action to start using this badge until after leaving office. On December 15, 1881, nine months out of the White House, he added a postscript to a letter to his son Rutherford saying, "I ought to have note paper with proper heading and a crest. The crest should be a common old fashioned anvil with a falcon sitting on it first spreading his wings for flight. Motto, 'Recte.' Send me a drawing of it." It is noteworthy that by this time Hayes had simplified his design by getting rid of the "supporters" he previously had in mind. The design was engraved on the Spiegel Grove notepaper, with the motto Recte appearing in Old English lettering without a scroll. The design was amended slightly over time. Sketches exist in the Hayes archives showing the falcon grasping a bunch of heather in its claws as it rests upon the anvil, although this change never seems to have been adopted. At some point, an additional motto was added on a scroll, Qui patriae optime servit optime servit suis partibus, an appropriate expression of the philosophy of this famously upright and honest statesman: "He serves his party best who serves his country best."

Oddly enough, the design at one point managed to find its way aboard a British warship in the middle of the Atlantic Ocean. In 1890, nine years after he left office, the former President and his daughter Fanny were visiting Hayes's niece and her husband in Bermuda, and the royal governor offered them the use of the small vessel HMS Supply to get around the island. As the former President's diary for April 28 tells the story, "At the head of the lunch table was a shield with the crest and motto used by Fanny on her note paper--the anvil and falcon, and the motto in Latin: 'He serves his party best, etc.'" The next day, "In the afternoon Captain Dowding, in his steam launch, brought the coat of arms and motto exhibited at lunch on the Supply. It was left hung up in one of the chambers at Soncy [his niece's house], to remain 'until one of my sons calls for it.'"

The device continued to be used in the Hayes family long after the former President's death in 1893. As late as 1928, his son Webb was commissioning new renderings of the badge, and a rendering of the falcon--although apparently alighting on a rock rather than springing from an anvil--reportedly still adorns the frame of his portrait at Spiegel Grove.

It seems to have been an article of faith in the Hayes household that the family was of noble Scottish lineage. As we have seen, President Hayes based the design of his "crest," or badge, on the crest and badges of the Hay family of Scotland, Earls of Erroll, and even his 1893 obituary in the New York Times reported the Scottish connection as established fact.

The Hayes family could boast a long line of honorable ancestry, if it chose to do so; but it appears to have taken but little or no interest in the matter. That branch of the family which includes Gen. Hayes can be traced, it is said, back as far as 1280, when Hayes and Rutherford were two Scottish chieftains, fighting side by side with Baliol [sic], William Wallace, and Robert Bruce. Both families were numbered among the nobility, owning extensive estates, and having a large number of followers. The Hayes family, in its prosperous days, before any of its descendants ever visited this country, and before the intermarriage with the Rutherfords, had for a coat-of-arms a shield, barred and surmounted by an eagle in the act of flying. There was a circle of stars about the eagle, and above the shield; while on a scroll underneath the shield was painted the motto, “Recte.” Some antiquarians describe the coat-of-arms as having alternate bars of silver and red on the shield; while others claim that the colors were white and blue. But, whatever may have been the shape or the color, no one but curious antiquarians would care to know; and the least interested searcher of all would be Gen. Hayes himself. There is no pride of ancestry to be found in his character: and, in fact, it is doubtful if he ever took the pains to ascertain whether his progenitors had either nobility or a coat-of-arms.

Even apart from the gratuitous and clearly misleading statement that the candidate had no interest in his ancestry, this account is almost entirely nonsense, both heraldically and genealogically.

Heraldically, the crest that the President's badge was based upon was, as we have said, that of the great Scottish noble family of Hay, Earls of Erroll. But Conwell's description of the arms themselves is a meaningless mish-mash. There are no bars on the well-known shield of this family, which is in fact silver (or white) with three red shields (in heraldic terms, Argent three escutcheons Gules).

Genealogically, the Hayes family tradition of descent from this family seems to be just as legendary as the picturesque but historically unsupported account of the origin of its arms. As it happens, there is not a shred of evidence that Hayes's immigrant forefather, George Hayes, was even from Scotland at all. The odds are certainly against it. The name Hayes is characteristically English, not Scottish, and when George Hayes came to Connecticut in 1680 Scottish immigration to New England would have been very much the exception. Nevertheless, the belief in the Scottish connection afforded Rutherford B. Hayes with an excellent stock of symbolism from which to start designing his personal heraldic device, and the fact that he came up with something so allusive and yet individually distinctive is very much to his credit.

The author would like to express sincere appreciation to Nan J. Card, curator of manuscripts at the Rutherford B. Hayes Presidential Center for kindly providing copies of the heraldic material in the Spiegel Grove collections. These documents included President Hayes's original handwritten blazon of his badge and the two engravings of the badge shown above, as well as copies of other correspondence.