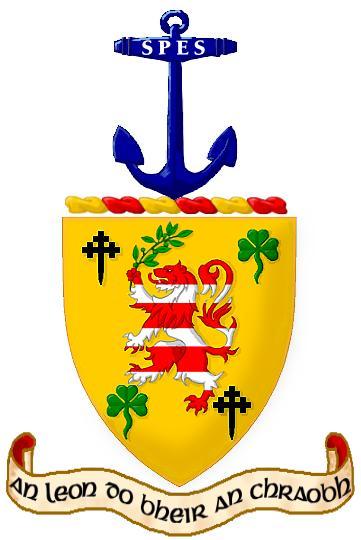 The Arms of Bill Clinton

Crest: On a wreath of the colors an anchor erect Azure on the stock the letters SPES Argent.

Motto: An leon do bheir an chraobh (The lion carries away the branch)

On December 1, 1995, during President Bill Clinton's state visit to Ireland, Prime Minister John Bruton presented the President with the letters patent conveying a grant of arms by the Chief Herald of Ireland. Clinton thus became the second President after John F. Kennedy to be granted Irish arms. While Kennedy's Irish associations were well-known and his arms were granted in memory of a specific ancestor, Clinton's were granted by Chief Herald Donal Begley on the basis of "certain forebears of Irish stock" who were not named in the grant. However, Mr. Clinton's mother was born Virginia Cassidy, a good Irish name, and others of his known forebears were of evident Irish ancestry as well.

The decisive element in the Chief Herald's decision to grant arms to Mr. Clinton, however, was that it was the wish of Prime Minister Bruton that this be done. Perhaps it is best to quote in full the history of the grant and the symbolism of the arms from a book about the arms that was presented by Mr. Bruton along with the letters patent: 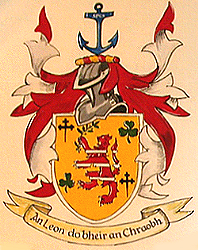 An Taoiseach [the Prime Minister], Mr. John Bruton, T.D., informed the Chief Herald in March, 1995, that it was his wish to honour President Clinton of the United States of America on behalf of the Government and People of Ireland with a formal grant of arms and heraldic banner. Accordingly, the Chief Herald was requested to prepare the appropriate legal instrument to give effect to An Taoiseach’s decision. The heraldic patent issued under the authority of the Government, in the English and Irish languages, is the legal instrument which conveys to William Jefferson Clinton, Esquire, exclusive rights of usage of the design shown on the face of the Patent in accordance with the terms set forth therein.

The central motif of the shield, the upstanding lion, the symbol of authority is heraldically associated with the surnames Blythe, Cassidy and Malone, all key family names in the President’s lineage. The olive branch is derived from the seal of the United States and the white bars or stripes emphasise the American character of the lion. The cross crosslets are traditionally associated with the surname Clinton and the shamrocks commemorate the President’s Irish forebears. The crest is an anchor which bears the Latin word Spes meaning ‘hope’ and this commemorates the President’s place of birth in Arkansas. The motto An leon do bheir an chraobh is from an early Irish saga and may be rendered in English ‘the lion champion who bears away the branch of victory.’

It should be pointed out in connection with the symbolism of the arms that the anchor itself is traditionally used as a symbol of hope, and is therefore an allusion to the President's hometown, even without the Latin word Spes.

According to an October 15, 1999, posting to the rec.heraldry newsgroup by the Irish genealogist Sean Murphy, Clinton's letters patent were dated June 15, 1995. The text and emblazonment from the book presented with Mr. Clinton's arms are based on photographs obtained from the Clinton Presidential Library and provided to the AHS by Sebastian Nelson.

Early in President Clinton's administration, the English company Burke's Peerage published what it described as arms it had designed for Mr. Clinton. Burke's Peerage is one of the companies that emerged from the bankruptcy of the original publishers of Burke's Peerage, Burke's General Armory, and other respected reference works on heraldry and genealogy. Unfortunately, this particular company (which is not to be confused with the similarly named Burke's Peerage and Gentry) has rarely lived up to its predecessor's reputation. The "arms" designed for Clinton are a hodge-podge of poor heraldic design, and the way they were advertised suggested falsely that the company had some kind of standing as an arms-granting authority. During the 2000 Presidential election, Burke's produced similar phony arms that purported to pertain to the two candidates, George W. Bush and Albert Gore. None of these designs should be taken as anything but a commercial fabrication.