The second Design Award of 2006 is awarded to The Archdiocese of Baltimore. The arms are described by heraldist William F.J. Ryan as follows:

The field is quartered in blue and silver, the Marian colors, in honor of Our Lady as the titular of the Cathedral church, the Basilica of the Assumption of the Blessed Virgin Mary.

The star in the upper left of the archdiocesan arms is also symbolic of the Blessed Virgin, patroness of the United States under her title of the Immaculate Conception. The Litany of Loreto beseeches our Lady as "Star of the Sea" and "Morning Star." 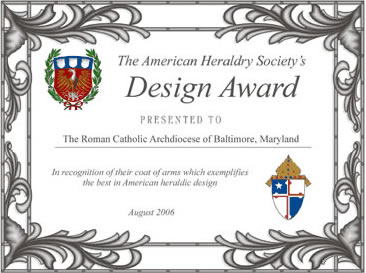