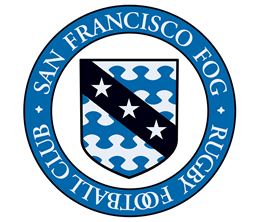 The Society's Fall 2007 Design Award was made to the San Francisco Fog Rugby Football Club for their distinctive coat of arms. The arms were designed by Pete Arden after the team's trip to London and Manchester in January 2001.

The arms are blazoned: Barry nebuly of six Argent and Azure, on a bend Sable three mullets of the first.

The barry nebuly field represents clouds, water, or air (fog) and the three mullets represent the team's players, the staff, and supporters.

The Fog has over 120 members. One of its more famous members was Mark Bingham, a hero of Flight 93 who is believed to have been among the passengers to storm the cockpit on 9/11. The Fog is one of the few teams that welcomes players regardless of experience level, age, race, or sexual orientation.

Information about the Fog can be found at http://www.sffog.org/about.