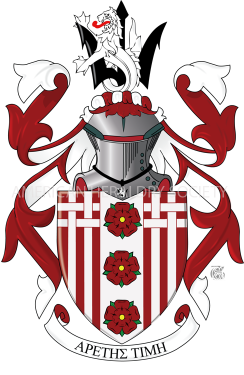 For 2009, the Society made its first and only design Award for personal heraldry. The arms of Terrence Sarros were selected by the Society members voting in an online poll. The arms are blazoned Gules on a Pale between four Pallets interlaced in chief with a Bar Gemel Argent three Roses Gules barbed and seeded Proper. The crest is on a wreath Argent and Gules a Sea Lion Argent its tail entwined around the shaft and centre tine of a Trident's Head issuant Sable. The motto, written in Greek, is rendered in English as "The honor of virtue."

The arms were assumed by Mr. Sarros and registered with the United States Heraldic Registry in 2008. The argent pale represents the armiger’s family, while the three roses represent his children. The pallets and bar gemel represent various challenges and difficulties the armiger has learned to accept and grow from in life. The arms were designed with the help of Society members. Mr. Sarros is a former director of information technology for the Society and an accomplished heraldic artist working mainly in digital media.