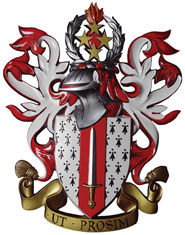 The Society's Spring 2007 Design Award was made to the Virginia Tech Corps of Cadets in Blacksburg, Va., for the clear and distinctive design of their arms. The arms were designed in 1965 by Col. Harry D. Temple, Virginia Tech alumnus ('34) and former cadet, when he was commanding officer of the U.S. Army Institute of Heraldry. Director of the Institute for many years, Temple was a noted American heraldist who was also active in the design of arms for the Episcopal Church, including the arms of the Episcopal Diocese of Virginia.

The arms are blazoned: Ermine on a pale Gules a sword proper hilted and pommelled Or. Crest: On a wreath of the colors, within a garland of two laurel branches Argent a grenade Gules flamed proper, over all four stars 1,2,1 Or. Motto: Ut prosim (That I May Serve).

According to the university, the color red was used to signify strength and courage while the sword represents command. The crest commemorates the Corps's war experience. The flaming grenade symbolizes preparation for war, while the four stars represent the four major wars in which Tech cadets fought before 1965: the Spanish-American War, World War I, World War II, and the Korean War. Finally, the laurel wreath marks the Presidential citation given to the cadets for their Spanish-American War service.

Information about the Corps of Cadets can be found at http:www.vtcc.vt.edu.