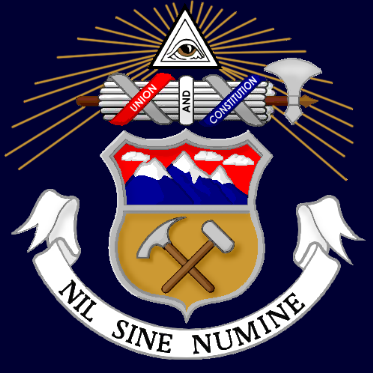 The arms of Colorado are the central element of the state seal, originally designed for the Territory of Colorado by Lewis Ledyard Weld, the territorial secretary, and approved by the territorial assembly on November 6,1861. The official blazon contained in the resolution was:

An heraldic shield, bearing in chief, or on the upper portion of the same, upon a red ground, three snow-capped mountains; above, surrounding clouds; upon the lower part of the shield, upon a golden ground, a miner's badge, being the same badge prescribed by the regular heraldic rules; as a crest, above the shield, the eye of God, being golden rays proceeding from the lines of a triangle below the crest, and above the shield, as a scroll, the Roman fasces (the insignia of a republican form of government), bearing on a band of red, white and blue the words “Union and Constitution,” below the whole, the motto, ‘’Nil sine Numine’’ (nothing without the Deity).

Put in more traditional heraldic terminology, the shield would be blazoned as Or a miner’s pick and hammer in saltire proper on a chief Gules three mountains capped with snow surrounded by clouds all proper.

When Colorado attained statehood in 1876, the design was retained by an act of the General Assembly of March 15, 1877, the only change being the wording on the ring surrounding the arms on the seal.

The symbolism is mostly self-explanatory. The golden field and the “miner’s badge” of crossed pick and sledgehammer represent the mineral wealth of the state while the mountains in chief signify the geographic feature for which Colorado is best known. The all-seeing "eye of God" is an ancient device best known in the American context as a key element in the reverse of the great seal of the United States. The fasces, a bundle of rods bound around an axe, was a symbol of the authority of the Roman state and was borrowed in modern times as an appropriate emblem of republican government in general. As an early 20th century history of Colorado points out, the rods bundled together are also an apt symbol of the importance of unity.

State Arms as badge of the Colorado National Guard

It is a frequent matter of dispute among heraldists as to whether the armorial devices on the seals of states like Colorado can properly be called coats of arms if there is no statute or other official enactment designating them as such. At one level, one may answer that if the device is on a shield and follows the heraldic conventions governing the design of coats of arms, it is a coat of arms whether there is a law saying so or not. In the case of Colorado, while the device on the seal has never been defined as the coat of arms, there have been a number of statutes passed by the General Assembly calling it the coat of arms. For example:

According to an article in the Colorado Magazine of November 1942, Secretary Weld's descendants long believed that the design of the Colorado arms was based on those of the Weld family. In fact, the Colorado arms bear no resemblance to those of the New England family from which the territorial secretary descended; they bore Azure a fess nebuly between three crescents ermine. The only element that came from their arms was the motto Nil sine numine. 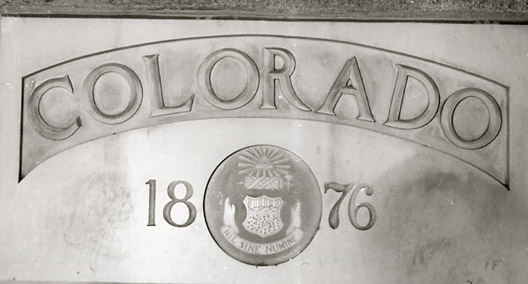