The seal of the old Saybrook Colony in what is now Connecticut, introduced in 1639, depicted 15 grapevines, with a hand issuing from clouds in the upper left corner holding a scroll inscribed Sustinet qui transtulit (He who transplanted sustains). This seal was transferred to the Connecticut Colony when it purchased the land and fort of the Saybrook settlement in 1644 and used de facto by the colony's General Court (legislature). On October 9, 1662, coincident with the promulgation of Connecticut's royal charter, the seal was formally adopted by the general assembly as the seal of the colony. It was used until 1687, when James II's despotic royal governor Edmund Andros abolished self-government throughout New England; the original seal disappeared during this period. The charter of Connecticut was restored in 1689. On October 25, 1711, the governor and council (upper house of the General Assembly) directed the purchase of a new seal, which was essentially that in use today. The grapevines were reduced to three--perhaps to represent the three original colonies of New Haven, Saybrook, and Connecticut (Hartford). The motto scroll was moved to the bottom of the oval seal and the words rearranged to read Qui transtulit sustinet. 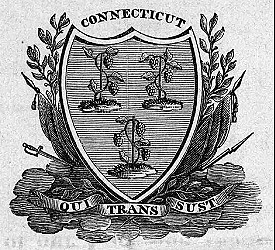 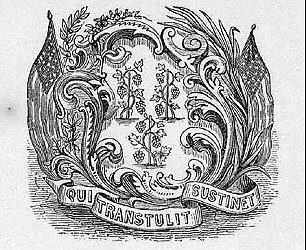 From an early period, the three grapevines were used on a shield as the arms of Connecticut, appearing in that form on state military colors among other places. The current official depiction of the arms on a rococo shield was in use by 1880; it was officially adopted by the General Assembly on March 24, 1931.