The official blazon of the Delaware coat of arms was enacted by the state legislature in 1847 (now codified in title 29 of the state code, section 301): "Party per fess, or and argent, the first charged with a garb (wheat sheaf) in bend dexter and an ear of maize (Indian Corn) in bend sinister, both proper; the second charged with an ox statant, ruminating, proper; fess, wavy azure, supporters on the dexter a husbandman with a hilling hoe, on the sinister a rifleman armed and accoutred at ease. Crest, on a wreath azure and argent, a ship under full sail, proper." The motto is "Liberty and independence."

Specific colors, including the clothing of the supporters, are prescribed in the section of the code relating to the state flag. These include stipulating that the chief of the shield is shown in orange--not "or" (yellow or gold), as the verbal blazon states and as state publications showed it as late as the 1950s.

The coat of arms was originally adopted on January 17, 1777, as the basic design of the state seal. The work of developing a seal had been entrusted in October 1776 to a joint committee of the two houses of the legislature, which (after a horrendous first concept offered by the committee in early November) eventually consulted with the Philadelphia heraldic artist Pierre Eugene du Simitiere on the matter. On January 17, 1777, the committee presented its final recommendation for a seal, which it described as "a Sheaf of Wheat, an ear of Indian Corn and an Ox in full Stature, in a Shield, with a River dividing the Wheat Sheaf and Ear of Indian Corn from the Ox, which is to be cut [i.e., on the seal die] on the nether part of the shield below the river; that the Supporters be an American soldier under arms on the right, and an Husbandman with a hoe in his hand on the left; and that a Ship be the Crest." The legislature accepted this design the same day. 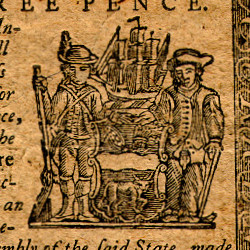 A rendering of this blazon can be seen on Delaware currency issued in early 1777 (left). The positions of the supporters are sometimes reversed in early depictions, possibly because of confusion between right/dexter and left/sinister in the statutory description. In addition, the tinctures were not specified by law; the state seal manufactured in 1793 contains Pietrasancta hatching indicating an azure field with a silver fess and ox.

At one level, the symbolism of the charges and supporters is obviously a reference to the role of agriculture in the state's economy. In addition, however, the wheat sheaf and ear of corn are drawn from the county crests used for Sussex and Kent Counties during the colonial period. Under the Penn proprietorship, of which modern Delaware was a part, each county was assigned a distinctive crest to be displayed with the Penn arms on the county seal. The ship crest of the Delaware arms represents New Castle County's shipbuilding industry, but is not the New Castle County crest (which was a castle).

It has probably been observed before but still interesting that the Delaware motto, "Liberty and independence," is a shortened form of Pennsylvania's "Virtue, liberty and independence." This borrowing may be appropriate, since the three counties of Delaware were originally part of Pennsylvania, but the significance of Delaware's having no "virtue" is perhaps best left to personal speculation.