In about 1634, soon after Maryland was first settled, the colony’s proprietor, Cæcilius Calvert, 2nd Baron of Baltimore in the Peerage of Ireland, sent over a seal to be used to authenticate the acts of the provincial government. On one side of this two-sided seal, and of another that was dispatched in 1648 after the first was stolen, were Baltimore’s family arms: Quarterly, 1st and 4th Paly of six Or and Sable a bend counterchanged, 2nd and 3rd Quarterly Argent and Gules over all a cross bottony counterchanged. The black and gold quarters were the arms of the Calverts themselves, while the red and silver were for the Crosslands, the family of Baltimore’s paternal grandmother. The Calvert crest atop the helmet was a pair of pennants, one gold and the other black, flying from staffs issuing out of a gold crest coronet. The motto was an Italian one, Fatti maschii, parole femine, “Manly deeds, womanly words.” On the opposite side of the seal was an idealized portrait of the baron himself, clad in armor and riding a charging horse caparisoned with the same arms, a very traditional design for the seal of an English nobleman.

But the arms shown on this provincial seal included several important alterations that Baltimore had made to reflect his standing under his charter of proprietorship, and these were not typical of the arms of an Irish or English baron at all. The charter, granted by King Charles I in 1632, named Baltimore “the true and absolute Lord and Proprietary” of Maryland and granted him “all, and singular such, and as ample Rights, Jurisdictions, Privileges, Prerogatives, Royalties, Liberties, Immunities, and royal Rights, and temporal Franchises whatsoever, as well by Sea as by Land, within the Region, Islands, Islets, and Limits aforesaid, to be had, exercised, used, and enjoyed, as any Bishop of Durham, within the Bishoprick or County Palatine of Durham, in our Kingdom of England, ever heretofore hath had, held, used, or enjoyed, or of right could, or ought to have, hold, use, or enjoy.”

Apparently based on this language, Baltimore arrogated to himself what he took to be the heraldic privileges of a count palatine. Perhaps he felt justified in this by the provision of the charter giving him “free and plenary Power…to confer Favors, Rewards and Honors upon such Subjects, inhabiting within the Province aforesaid, as shall be well deserving,” although it must be noted that Cæcilius himself never set foot in Maryland. Nevertheless, all the external accoutrements surrounding Lord Baltimore’s previous arms were upgraded to reflect his virtual sovereignty over his American domains. For the leopards that had previously supported the Calvert arms, Baltimore substituted a pair of human supporters, a farmer on the dexter side and a fisherman on the sinister. The shield was topped with an earl’s coronet—indicative of a count palatine—rather than the baron’s coronet to which he was entitled at home. In place of a barred silver helmet in profile, signifying a peer of the realm, the provincial arms used a similar helmet affronty, facing the viewer. Since barred helmets affronty were the sole prerogative of members of the Royal Family, this was an assertion of grandeur indeed, although Baltimore did stop short of claiming fully sovereign status by making his helm silver instead of the gold used by British royalty. Finally, in lieu of the standard lambrequin, or mantling, in the principal colors of the shield (black and gold), Lord Baltimore placed the arms against the crimson manteau lined with ermine typical of high European nobility. 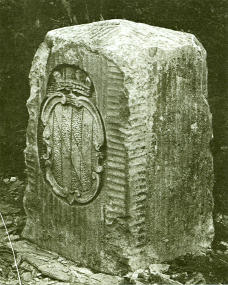 Except for the two decades from 1692 to 1715, when the Proprietorship was replaced by a royal governor, Lord Baltimore’s arms served as the provincial arms of Maryland up to and even through the American Revolution. Either in the full form or with the Calvert quartering alone, they were used not only on official seals but also imprinted on published volumes of laws, paper currency, and other official documents. The Calvert quartering, topped with the original baron's coronet, was even carved on the “crownstones” demarcating Maryland’s boundary with Pennsylvania, the famous Mason-Dixon line.

Over time, the Lord Proprietary’s personal arms, as embellished on the provincial seal, were transformed in the minds of Marylanders into what are called arms of dominion—arms that pertained to the political entity known as Maryland, no matter who was governing it. Thus, after Independence was declared in 1776, the Governor’s Council did not immediately move to discard the Calvert emblems, but rather voted on March 31, 1777, to retain the old provincial seal as that of the now-independent State of Maryland “until a new one can be devised and executed, which cannot be done for immediate service.” The implication is that wartime conditions precluded the replacement of the seal, yet all three of Maryland’s neighbors had already abandoned their colonial arms and seals in favor of new designs when the Council made this decision. Not only was the old seal kept in use, but the arms continued to be used for the same purposes as before. Starting in 1777, for example, the full achievement of Lord Baltimore's arms began appearing on the official printed volumes of statutes passed by the General Assembly of the State of Maryland, save for a change in the motto to the biblical injunction, Crescite et multiplicamini (“Increase and multiply”—Genesis 9:1).

Arms of the State of Maryland
as printed on session laws, 1777-1794
Source: Maryland State Archives 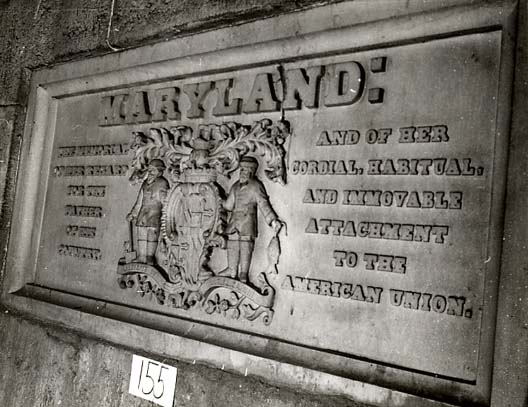 The war had been over for more than 12 years by the time the Council finally replaced the old provincial seal with a new one in the neo-Classical “republican” style in 1794. This seal was remarkably short-lived, however. It survived only until 1817, when it was replaced with one portraying the arms of the United States. Yet even during this period, it seems to have been taken for granted in Maryland that these changes in the design of the seal did not necessarily supersede the old design as the coat of arms. The commemorative stone commissioned by Maryland in 1851 for placement in the proposed monument to George Washington in the nation's capital included a full achievement of the traditional heraldic arms of the state. A few years later, in 1854, when Governor Enoch Louis Lowe asked the General Assembly to replace the worn-out seal die of 1817, he expressed the opinion that the seal “should in my judgment consist of the arms of the State.” He did not refer to them as the "former arms" or the "colonial arms," but as "the arms of the State." The legislature responded by passing an act providing “that the seal to be procured shall contain on its face the arms of the State, as heretofore known and accepted.”

Notwithstanding the wording of the law, the actual seal die that was procured did not match the arms as used in the 1777-1794 period in all respects. All the components above the shield--Lord Baltimore’s count palatine’s coronet, helmet, crest coronet, and pennants--were replaced by an American eagle rising. The official charged with procuring the seal supposedly feared that the governor’s political opponents would cite the presence of such noble insignia on the new seal as evidence of aristocratic tendencies. Furthermore, because of reliance on an erroneous pre-Revolutionary rendering of the arms, the pales in the Calvert quartering were reduced from six to five. These alterations and mistakes were eventually rectified in 1876, when a law was enacted returning the Maryland arms to the exact appearance of the provincial seal provided by Lord Baltimore in 1648.

Current Law and Use

Interestingly, although the 1854 law restoring the coat of arms to the seal referred to it as the “the arms of the State,” the present statute on the seal refers to it only as Lord Baltimore's hereditary coat of arms. The official description, according to the Maryland State Government Code § 13-102 is:

The 1st and 4th quarters represent the arms of the Calvert family described in heraldic language as a paly of 6 pieces, or (gold) and sable (black) a bend counterchanged. The 1st and 4th quarters are the left-hand top quarter and the right-hand bottom quarter. The 2nd and 3rd quarters show the arms of the Crossland family, which Cecil inherited from his grandmother, Alicia, wife of Leonard Calvert, the father of George, 1st Lord Baltimore. This coat of arms is in quarters also, argent (silver) and gules (red) a cross bottony (boutonné, with a button or a three-leaf clover at the end of each radius of the cross) counterchanged. Above the shield is placed an Earl's coronet (indicating that though only a baron in England, Calvert was an earl or count palatine in Maryland). Above that, a helmet set full faced and over that the Calvert crest, (2 pennons, the dexter or the right one or (gold), the other sable (black) staffs gules (red) issuing from the ducal coronet). The supporters of the shield are a plowman and a fisherman with their hands on the shield, designated respectively by a spade held in the right hand of the plowman and a fish held in the left hand of the fisherman (the fish is heraldic and cannot, therefore, be identified as to any species). The plowman wears a high-crowned, broad-brimmed beaver hat; the fisherman wears a knitted cap (somewhat resembling a stocking cap). The motto in Italian on a ribbon at the feet of the plowman and fisherman is the motto of the Calvert family "Fatti maschii parole femine" loosely translated as "Manly deeds, womanly words". Behind and surrounding both shield and supporters is an ermine-lined mantle.

The Maryland arms are used quite prominently for a variety of purposes. In addition to appearing on what is technically the reverse (but the only side actually used) of the state seal, they also appear on the seal of the University of Maryland. The shield of the arms is painted on highway signs welcoming travelers to the state, cast into historical markers, and imprinted on Maryland license plates. The Calvert quartering alone appears on the seals of three Maryland counties, the combined Calvert and Crossland quarterings on three more. It has inspired a large number of other arms, including those of Baltimore County and the City of Baltimore, the Roman Catholic Archdiocese of Baltimore and the Episcopal Diocese of Maryland, Johns Hopkins University, the ballistic missile submarine USS Maryland, and a number of Maryland National Guard regiments and battalions. Finally, and most famously, the state flag of Maryland is a simple banner of the quartered Calvert and Crossland arms.