The Massachusetts coat of arms is legally described as "a shield having a blue field or surface with an Indian thereon, dressed in a shirt and moccasins, holding in his right hand a bow, and in his left hand an arrow, point downward, all of gold; and, in the upper corner of the field, above his right arm, a silver star with five points. The crest is a wreath of blue and gold, on which in gold is a right arm, bent at the elbow, clothed and ruffled, with the hand grasping a broadsword."

This coat of arms was adopted by Governor John Hancock and his Council on December 13, 1780, based on a description prepared by Nathan Cushing. The original legal enactment was in the "jewel" style of heraldic blazon popular at the time:

Sapphire an Indian dressed in his shirt and moccasins, belted proper. In his right hand a bow topaz; in his left, an arrow, its point towards the base. On the dexter side of the Indian's head a star, pearl, for one of the United States of America.

Crest. On a wreath a dexter arm, clothed and grasping a broadsword, the pummel and hilt topaz. 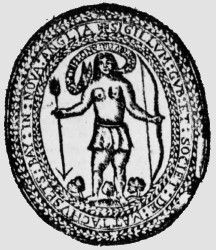 The design is based on a colonial seal in use from 1629-1686 and 1689-1692, which showed an Indian standing between two small pine trees, holding a bow in his left hand and an arrow point downward in his right, with a scroll issuing from his mouth reading "Come over and help us," a quotation from Acts 16:9. The image is generally supposed to be that of Massasoit, a friendly Indian leader who provided crucial counsel and assistance to the first English settlers, the Pilgrims, following their arrival at Plymouth in 1620.

The coat of arms was reaffirmed by the General Court (legislature) on June 4, 1885, and again in 1898. Surrounded by a circlet inscribed Sigillum Reipublicae Massachusettensis (Seal of the Commonwealth of Massachusetts), it serves as the central design of the state seal. 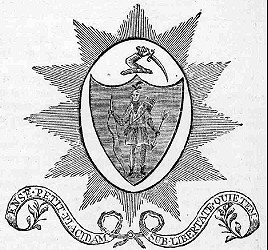 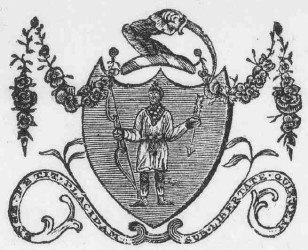 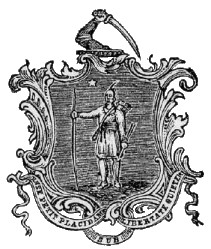 From Independence until well into the second half of the 19th century, the style of presentation used in official renderings of the arms varied with the full flexibility permitted by heraldic tradition. Eventually, however, this flexibility was eliminated. Modern official depictions of the arms invariably use what the state calls a "Plantagenet" shield. The Indian is dressed in the style of the Algonquin nation that populated Massachusetts at the time. The arrow points downward to indicate that he is peaceful. As indicated in the 1780 law, the star symbolizes Massachusetts as one of the states of the United States.

The crest, an arm holding a sword, derives from the seal adopted by the revolutionary provincial congress of Massachusetts in 1775 and used until the Cushing design was enacted. This wartime seal replaced the peaceful Indian holding an arrow pointed downward with a colonist brandishing a sword in one hand and a scroll labelled Magna Carta in the other. This seal bore the motto, Ense petit placidam sub libertate quietem. This line, conventionally translated "By the sword we seek peace, but peace only under liberty," is attributed to Algernon Sydney, an English soldier and politician, writing in 1659. As the first line of Sydney's original maxim was Manus haec, inimica Tyrannis [This hand, opposed to tyrants], the motto clearly refers to the hand with the sword. It was carried over as the motto on the 1780 coat of arms and continues in use today. 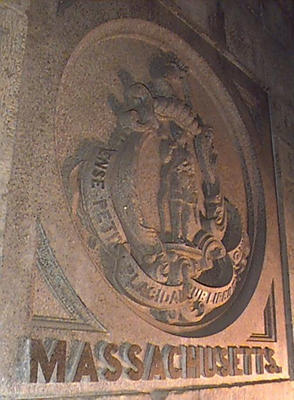