The "armorial achievement" of Missouri was adopted by an act of the General Assembly on January 11, 1822. The current legal description of the arms is codified in the Revised Statutes of Missouri, Title II, Chapter 10, §10.060:

Arms, parted per pale, on the dexter side; gules, the white or grizzly bear of Missouri, passant guardant, proper on a chief engrailed; azure, a crescent argent; on the sinister side, argent, the arms of the United States, the whole within a band inscribed with the words "United we stand, divided we fall." For the crest, over a helmet full-faced, grated with six bars; or, a cloud proper, from which ascends a star argent, and above it a constellation of twenty-three smaller stars, argent, on an azure field, surrounded by a cloud proper. Supporters on each side, a white or grizzly bear of Missouri, rampant, guardant proper, standing on a scroll, inscribed with the motto, "Salus populi suprema lex esto", and under the scroll the numerical letters MDCCCXX.

This official blazon is the same one submitted by the committee appointed by Governor Alexander McNair in November 1821 for the purpose of developing the great seal, as called for in the state constitution of 1820. The committee, consisting of Chauncey Smith, James Alcorn, and Elisa Elston reported to the General Assembly on December 31 that a design had been finalized. Although the House of Representatives preferred “a cock close around resting on a sheaf of wheat” and the Senate wanted an eagle on the wheat sheaf, it was the seal containing the armorial achievement submitted by the committee that was approved by the Assembly and the Governor. Subsequent constitutional revisions have provided that “the emblems and devices thereof heretofore prescribed by law shall not be subject to change.”

According to tradition, it was Nathaniel Beverly Tucker, a federal judge in Missouri and states rights advocate, who actually designed the state arms, which the committee then presented to the General Assembly. Judge Tucker explained the meaning of the arms as follows:

The arms of the State of Missouri and of the United States, empaled together yet separated by a pale, denote the connection existing between the two governments, and show that although connected by a compact, yet we are independent as to internal concerns; the words surrounding the shield denote the necessity of the union. Quadrupeds are the most honorable bearing. The great grizzly bear being almost peculiar to the Missouri river and its tributaries, and remarkable for its prodigious size, strength and courage, is borne as the principal charge of our shield. The color of the shield is red and denotes hardihood and valor. The chief is most honorable of all ordinaries.

The color blue signifies vigilance, perseverance and justice. The crescent in heraldry is borne on the shield by the second son, and on our shield denotes that we are the second state (Louisiana being the first) formed out of the territory not within the original territorial limits of the United States. The crescent also denotes the growing situation of the state as to its inhabitants, wealth and power. The color white signifies purity and innocence. The helmet indicates enterprise and hardihood. The one blazoned on this coat of arms that assigned to sovereigns only. The star ascending from a cloud to join the constellation shows Missouri surmounting her difficulties and taking her rank among the states of the Union. The supporters, the same powerful animals borne on the shield, on which are emblazoned the arms of the state and of the United States, denote that while we support ourselves by internal strength we are also in support of the general government. The motto shows that the good of the people is the supreme law of the state. The numerals under the scroll show the date of the constitution.

Use of the Arms on the State Flag 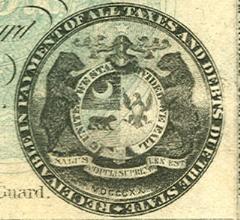 There was no move to create a state flag for Missouri until the onset of the Civil War, 40 years after the arms and seal were adopted. The first such moves took the form of secessionist and regimental flags. A secessionist flag flown over the St. Louis courthouse on March 4, 1861, resembled the U.S. flag but with the Missouri arms in place of the stars on the blue canton. Then, on April 29, another secessionist flag bearing a remarkable resemblance to the current state flag appeared over the Lewis County courthouse in Monticello: a horizontal tricolor of red, white, and blue, with the state arms in the center. In both cases, the crest was depicted as a single star without the surrounding 23 smaller stars, signifying that Missouri had withdrawn from the Union and was now an independent state. 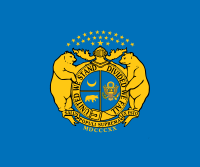 On May 11, the secessionist state legislature authorized Governor Claiborne Fox Jackson to reform the Missouri State Militia into the Missouri State Guard to fight on the Confederate side. On June 5, Maj. Gen. Sterling Price issued General Order No. 8, directing that “each regiment will adopt the State flag, made of blue merino, 6 by 5 feet, with the Missouri coat-of-arms in gold gilt on each side. Each mounted company will have a guidon, the flag of which will be of white merino, 3 by 2½ feet, with the letters M.S.G. in gilt on each side." Ironically many regimental colors of Missouri units in Federal service were also blue with the state arms in gold. Several non-standard flags of Missouri Confederate units also bore the state arms upon them.

After the war, there was once again no state flag until the Daughters of the American Revolution created a committee to research and develop one around the turn of the 20th century. Marie Elizabeth Watkins Oliver was appointed the chairwoman of this committee in 1908. Bills were introduced in the legislature in 1909 and 1911, but failed to make their way through the House. Finally, on March 22, 1913, the Oliver Flag Bill was signed into law. The flag has remained unchanged since. 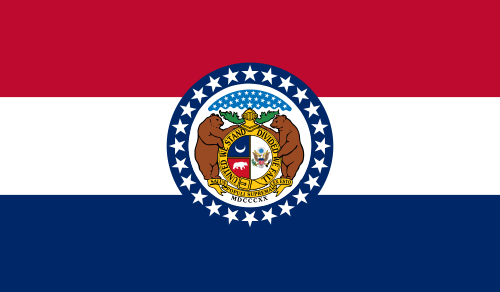 Modern Military Use of the Arms 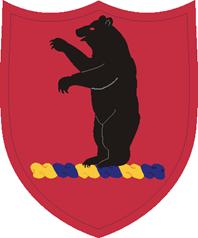 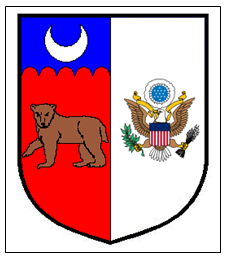 Correct arms according to law

There are three common inaccuracies in most emblazonments of the Missouri state arms, including that on the official flag. First, the dexter side is typically divided per fess instead of gules a chief azure. Second, the division line between the chief and base on the dexter side is usually drawn straight rather than engrailed. Finally, the grizzly on the shield faces to the sinister (which is not called for in the blazon), is not guardant (which is), and is silver rather than proper, i.e., in natural colors.