In 1928, the New Jersey state legislature enacted Joint Resolution 8 blazoning the arms of the state as "Three ploughs in an escutcheon, azure; supporters Liberty and Ceres. The Goddess Liberty to carry in her dexter hand a pole, proper, surmounted by a cap gules, with band azure at the bottom, displaying on the band six stars, argent; tresses falling on shoulders, proper; head bearing overall a chaplet of laurel leaves, vert; overdress, tenné; underskirt, argent; feet sandaled, standing on scroll. Ceres; same as Liberty, save overdress, gules; holding in left hand a cornucopia, or, bearing apples, plums and grapes surrounded by leaves, all proper; head bearing over all a chaplet of wheat spears, vert. Shield surmounted by sovereign's helmet, six bars; or, wreath and mantling, argent and azure. Crest: A horse's head, proper. Underneath the shield and supporting the Goddesses, a scroll azure, bordered with tenné, in three waves or folds; on the upper folds the words 'Liberty and Prosperity'; on the under fold in Arabic numerals, the figure '1776'."

The origin of the arms dates back to 1776. In September of that year the two houses of the legislature appointed a joint committee to recommend a design for a seal. On October 3, the committee reported back a proposal based on a coat of arms described as "three Ploughs in an Escutcheon; the Supporters, Liberty and Ceres, and the Crest, a Horse's Head." The committee was authorized by the legislature to engage Francis Hopkinson (who was later involved in the design of the American flag and arms) to make the arrangements for producing the seal. Hopkinson in turn hired Pierre Eugene du Simitiere, a prominent heraldic artist in Philadelphia. Simitiere's work was presented to the legislature in May 1777 and accepted.

Shortly thereafter, the new coat of arms began appearing in use. Early New Jersey copper coins, for example, show the horse's head crest, and the full arms appear on paper currency issued in 1781. The specific shades of colors, attitudes of the supporters, etc., varied according to the taste of the artist, as is encouraged by heraldic tradition. However, given the original law's lack of specificity with regard to tinctures, the arms were often shown with a white field in the early years, a variation that is emphatically not within heraldic tradition. Later blue became the most usual choice and the invariable one shortly after 1900. The current detailed blazon was enacted to preclude all further variation in the artistic treatment of the arms, and the artist Warren E. Deming was hired to draw a permanent authoritative depiction.

The 1928 resolution also gave official sanction to the motto, which had first appeared in a representation of the arms on the 1821 edition of the state laws.

The three plows obviously represent agriculture. Simitiere placed the crest atop a forward-facing barred helmet--now always shown as gold--the position and type of helm appropriate to a sovereign in English heraldic usage. The motto alludes to the supporters, Ceres being the Roman goddess of the harvest. 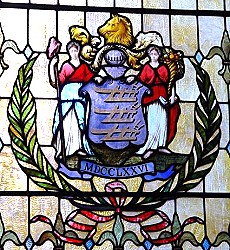