The New York coat of arms is blazoned in New York State Consolidated Laws, Chapter 57, Article 6, § 70 as "Azure, in a landscape, the sun in fess, rising in splendor or, behind a range of three mountains, the middle one the highest; in base a ship and sloop under sail, passing and about to meet on a river, bordered below by a grassy shore fringed with shrubs, all proper."

The law defines the crest as "On a wreath azure and or, an American eagle proper, rising to the dexter from a two-thirds of a globe terrestrial, showing the North Atlantic Ocean with outlines of its shores." The supporters are "the figure of Liberty proper, her hair disheveled and decorated with pearls, vested azure, sandaled gules, about the waist a cincture or, fringed gules, a mantle of the last depending from the shoulders behind to the feet, in the dexter hand a staff ensigned with a Phrygian cap or, the sinister arm embowed, the hand supporting the shield at the dexter chief point, a royal crown by her sinister foot dejected" and "the figure of Justice proper, her hair disheveled and decorated with pearls, vested or, about the waist a cincture azure, fringed gules, sandaled and mantled as Liberty, bound about the eyes with a fillet proper, in the dexter hand a straight sword hilted or, erect, resting on the sinister chief point of the shield, the sinister arm embowed, holding before her her scales proper." The motto, prescribed as being in black letters on a white scroll, is "Excelsior." 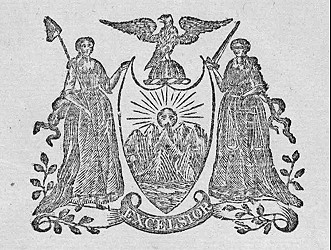 This blazon was developed by a commission appointed in 1880 to develop a standard presentation of the arms of the state, which had originally been developed (and was already in use in military colors) in 1777 and officially adopted by law on 16 March 1778 as "A rising sun over three mountains; motto underneath 'Excelsior.'" This blazon obviously does not mention the vessels on the river, or even the river itself. Early depictions of the arms, up to the time of the Civil War, do consistently show the river but not the ships or the near river bank in the base of the shield. The one exception, a depiction used on military commissions during the Revolutionary period, was the model used in 1880, which was subsequently approved by an 1882 act of the state legislature as the arms' "permanent design and legal form." This blazon was amended slightly in 1896 to its present wording.

The landscape on the shield is said to represent the sun rising behind Mount Beacon over the Hudson River. The sun is variously supposed to derive from the medieval sun badge of the House of York (for the Duke of York after whom the state is named) or from the arms of Jonas Bronck, a major landowner. (The rising sun appears on the flag of the New York City Borough of the Bronx, which occupies the land once owned by Bronck and is named after him.) The ship and sloop are indicative of trade--the sloop shown is of a design typical of the up-river trade in the days of sail. The other symbols mostly speak for themselves. The motto, Excelsior, means "ever upward."