The blazon of the Pennsylvania coat of arms used officially by the Secretary of the Commonwealth's office is based on one prepared for the General Assembly in 1875: "Escutcheon - Party per fess, azure and vert. On a chief of the first, a ship under sail; On a fess, or, a plough, proper; On a base of the second, three garbs or; CREST - An eagle rousant, proper, on a wreath of its colors; SUPPORTERS - Two horses sable, caparisoned for draught, rearing respectant. MOTTO: Virtue, Liberty, and Independence."

The first known blazon of the arms is a description of the form in which they were used on the state seal, entered in the minutes of the General Assembly in 1809. This blazon provided for two additional elements surrounding the shield: "On the sinister a stock of maize, and dexter an olive branch." It also specified that the crest is a bald eagle. Both of these features are included in the official representation of the full achievement of the arms even though they were omitted from the 1875 blazon. 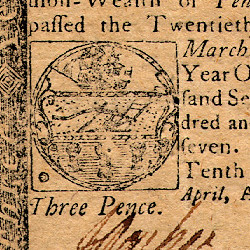 The Pennsylvania constitutional convention of 1776 had provided for the adoption of a seal to be used to authenticate commissions. The seal produced in response to this direction had a rococo escutcheon with curved upper and lower edges to fill the entire inner area of the seal with the same charges found on the modern coat of arms. This version of the arms was in use by April 1777 when it appeared on currency issued by the state. An impression from a 1780 die of this seal is in the Canadian national archives and is shown on the website HeraldicAmerica. 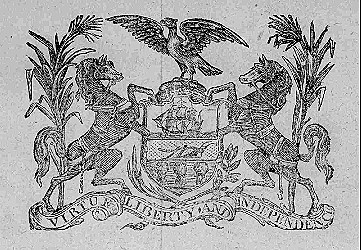 Arms of Pennsylvania from a
1780 gubernatorial proclamation
Source: Library of Congress

The earliest known achievement of the arms complete with crest and supporters dates to 1779, when Caleb Lownes was paid £35 for engraving the arms for the Supreme Executive Council. Other early representations include a 1785 painting by Jacob Rutter in the old state Supreme Court chamber in Independence Hall and an engraving that appeared in the Columbian Magazine in 1787. Lownes's engraving for the Executive Council was the first to show the supporters, crest, and motto, and the corn and olive branches beneath the shield. It shows the horse supporters in draft harness, as in the current official depiction. Lownes shaded the horses with engraver's cross-hatching, but did not use Pietrasancta heraldic hatching on them to indicate colors as he did on the shield itself. The Rutter painting, which seems to be the oldest surviving full color depiction, has white horses, an example that was followed by many official renderings, including those on state militia colors, until after the Civil War.

As mentioned above, the first blazon of the arms officially adopted was developed pursuant to an act of the General Assembly of March 2, 1809, directing the preparation of a verbal description of the existing, worn-out die of the great seal for use in procuring a replacement. According to Zieber's Heraldry in America (1895), the blazon developed for this purpose, entered into the assembly's executive minutes on July 1, 1809, read: "The shield shall be parted Per Fess, Or, charged with a plough, Proper, in chief; on a sea wavy, Proper, a ship under full sail, surmounted with a sky, Azure; and in Base, on a field Vert, three Garbs or. On the sinister a stock of maize, and Dexter an olive branch. And on the wreath of its colours a bald eagle--Proper, perched Wings extended, for the Crest. Motto--Virtue, Liberty, and Independence." The description of the base as green (vert) and the sky in chief as azure were in error; the seal that was being described as well as all four of the other early depictions--the 1777 currency, the Lownes engraving, the Rutter painting, and the Columbian Magazine engraving--show the chief white or silver (argent) and the base blue (azure). 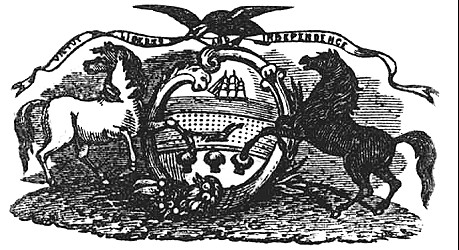 An 1858 engraving of the Pennsylvania arms

The standard version of the full arms as blazoned in 1875 was developed after the state legislature expressed unhappiness with the inconsistency in how different artists depicted them, particularly with regard to the posture of the horses. The legislature named a commission in 1874 to determine the "correct" version of the arms. This commission issued its report in 1875, settling on a version that conformed closely to its understanding of the Lownes 1779 engraving, with the horses black and "caparisoned for draught," and the escutcheon surrounded by a rococo gold frame. However, the commission followed the 1809 language in stipulating the chief as blue and the base as green, not the white and blue of the Lownes model.

The arms as shown on the present great seal, following a pattern adopted in 1893, still conform to the 1809 description, with the escutcheon, crest, and flanking branches but not the supporters or motto. Apart from the obvious connection of the charges in the arms with agriculture and commerce, each of them derives from symbols used in Pennsylvania prior to independence. Under the Penn proprietorship, each county used a seal with the shield from the Penn arms (Argent on a fess sable three plates) surmounted by a distinctive crest. The crest for Philadelphia County was a ship; that for Chester County a plow. The wheat sheaves are generally ascribed to Sussex County, once part of Pennsylvania but by the time of the Revolution part of Delaware. (Sussex is also represented by a garb in the arms of Delaware.) In addition, the arms of the City of Philadelphia adopted in 1701 had both a ship and a garb as well as other charges.

Sources not mentioned above: