According to Section 42-4-1 of Rhode Island General Laws, "The arms of the state are a golden anchor on a blue field, and the motto thereof is the word 'Hope.'" This blazon was officially adopted by the General Assembly in 1881, effective 1 February 1882.

However, this merely codified the basic design of a long pre-existing coat of arms used by the state. An anchor had served as the principal symbol of Rhode Island for more than two centuries by the time the coat of arms was officially adopted. The first seal of the colony had an anchor. Impressions of various Rhode Island seals are extant, dating as far back as 1661.

As can be seen from these impressions, the anchor on the seal was always intended to be shown on a shield as a coat of arms. Over the years, however, and particularly over the course of the 19th century, the outline of the shield became more and more elaborate, until finally the whole idea of its being a shield was lost and it became the purely decorative series of swirls and dots that appear on the seal in use since 1913.

One difference between early and modern depictions of both the arms and the seal is the absence of the cable in the modern version. According to Whitney Smith's Flag Book of the United States (1975), the governor of the state somehow became convinced in 1892 that the cable was not authorized, even though it had appeared on all the seals and arms used by the state since 1664. In addition, pre-1882 representations often show the arms with the shield white (argent) and the anchor proper. 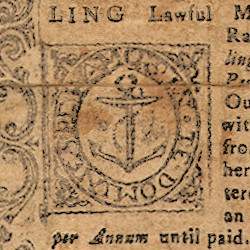 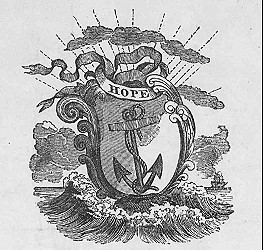 The current official pattern of the coat of arms is contained in a 1913 state publication, "The Seal, the Arms, and the Flag of Rhode Island."