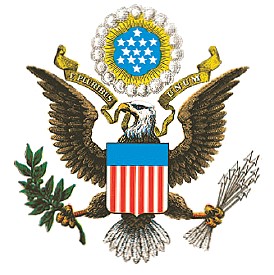 The coat of arms of the United States was adopted by Congress on June 20, 1782, as part of a resolution approving the design of a great seal for the United States in Congress assembled. Under this resolution, the arms, which appear on the obverse (front side) of the seal, were officially blazoned as:

ARMS. Paleways of thirteen pieces argent and gules; a chief, azure; the escutcheon on the breast of the American eagle displayed proper, holding in his dexter talon an olive branch, and in his sinister a bundle of thirteen arrows, all proper, and in his beak a scroll, inscribed with this motto, “E pluribus Unum.”
For the CREST. Over the head of the eagle, which appears above the escutcheon, a glory, or, breaking through a cloud, proper, and surrounding thirteen stars, forming a constellation, argent, on an azure field.

(In addition, as was customary for the seals of sovereign governments, a reverse of the seal was prescribed, consisting of an unfinished pyramid surmounted by the all-seeing eye of Providence. While the reverse is an integral part of the design of the seal, it is not part of the arms, which appear only on the obverse, and is therefore not discussed in this article.)

The design accepted by Congress was the end result of nearly six years of sporadic work by three different Congressional committees. The final product, while it drew to some extent on previous designs proposed by the committees, was basically the work of Charles Thomson, Secretary of the Congress, and William Barton, a Philadelphia lawyer with an interest in heraldry who had also advised the third committee. Thomson had been entrusted by Congress with the design of the seal following the unsatisfactory result of this third committee a few weeks before, and Thomson had promptly turned to Barton to draw on his heraldic expertise.

Along with the blazon approved by Congress, Thomson submitted a text entitled “Remarks and Explanation” describing the symbolism behind the design:

The escutcheon is composed of the Chief and pale, the two most honorable ordinaries. The pieces, paly, represent the several States all joined in one solid compact entire, supporting a Chief which unites the whole and represents Congress. The motto alludes to this Union. The pales in the Arms are kept closely united by the Chief and the Chief depends on that union, and the strength resulting from it for its support, to denote the Confederacy of the United States of America, and the preservation of their Union through Congress. The colours of the pales are those used in the flag of the United States of America. White signifies purity and innocence. Red hardiness and valour and Blue the colour of the Chief signifies vigilance perseverance and justice. The Olive Branch and arrows denote the power of peace and war which is exclusively vested in Congress. The Constellation denotes a new State taking its place and rank among other sovereign powers. The escutcheon is borne on the breast of an American Eagle without any other supporters, to denote that the United States of America ought to rely on their own virtue.

Sources of the Design

In their official history of the great seal, The Eagle and the Shield (1978), Richard S. Patterson and Richardson Dougall discuss in considerable depth the sources of the elements comprising the final design.

The Motto. The motto E Pluribus Unum (Out of many, one) appeared in the design of the arms prepared by Pierre Eugène du Simitière and submitted to Congress by the first seal committee in August 1776. Patterson and Richardson conclude that it almost certainly was taken from the legend on the title page of each issue of an English periodical, the Gentleman’s Magazine, which was widely known to educated Americans. The Gentleman’s Magazine had taken the motto from an earlier, unrelated magazine known as the Gentleman’s Journal, published in the late 17th century. While many classical Latin sources contain the thought of one entity being formed from many, Patterson and Richardson say that no one has ever found this expression in exactly this form prior to its appearance in the Gentleman’s Journal.

The Eagle. While the eagle first appears as a motif in William Barton’s initial design for the third seal committee in 1782, it only takes a prominent place in the arms in Charles Thomson’s proposal in June of that year. Although the eagle as a single supporter is very rare in British heraldry, Patterson and Richardson show that Thomson was probably familiar with the pattern thanks to its appearance on German coins (such as the internationally-circulated silver thalers of the Holy Roman Empire) or in Continental books on heraldry, at least one of which was in the collection of the Library Company of Philadelphia. Specifying the bird as an American eagle would seem to be a totally original contribution.

The Olive Branch and Arrows. The motif of an imperial eagle holding in his talons the instruments of war and peace has a long history, and Charles Thomson was certainly familiar with at least part of it. Benjamin Franklin owned a copy of the 1702 edition of an influential book of emblematic designs by the German Joachim Camerarius, originally published in 1605. Franklin was a member of the 1775 Congressional committee charged with issuing Continental currency, each denomination of which bore a different emblem and motto, most of them taken from Camerarius. Patterson and Richardson believe that Thomson was familiar with Franklin’s copy of this book of emblems--one of which portrays an eagle displayed with an olive branch near (although not in) his right talon and a bundle of arrows near his left, symbolizing peace and war—and that this was the most likely source of Thomson’s design. In addition, the idea of a bundle of arrows to represent the unity of component parts of a nation would have been familiar from the arms of the States General of the Netherlands, on which a lion holds a sheaf of seven arrows representing the seven united provinces.

The Stars. The 13 stars representing the American states as a new constellation first appear as the crest of the arms in the proposals by Francis Hopkinson submitted by the second seal committee in 1780. By this time, nearly three years after the adoption of the Stars and Stripes as the U.S. flag, the idea of the American union as a new constellation would have been a familiar one, particularly to Hopkinson, who was the prime mover in the design and adoption of the flag.