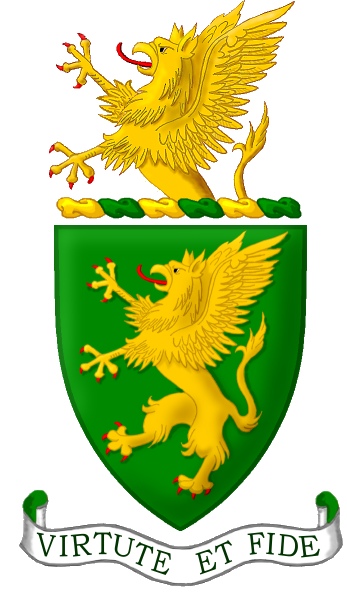 The Arms of Calvin Coolidge

Arms: Vert a griffin segreant Or.

Crest: A demi-griffin segreant Or.

Although President Calvin Coolidge himself probably never made use of any personal heraldic device, a coat of arms was attributed to his family long before he was even born. Moreover, the existence of these arms was widely known during his time in office--to some extent with his cooperation, although not at his initiative.

John Calvin Coolidge, Jr., was born in Plymouth, Vermont, on July 4, 1872, the ninth generation descendant of another John Coolidge who had immigrated to Watertown, Massachusetts, from Cambridgeshire in about 1630. In 1855, Henry Bond, M.D., published a collection of genealogies of the early settlers of Watertown, in which he traced the Watertown Coolidges to one Thomas Colynge, of Arrington, Cambs., who died in 1495. Along with the genealogy, Dr. Bond included an illustration captioned "The Original Arms of Coulinge," showing a golden griffin on a green field, with a golden demi-griffin as the crest. Bond quoted an English genealogist, H. G. Somerby, in support of this armorial attribution:

That the name (Coulinge) is derived from the village of Couling or Cowling in Suffolk, there is not the least doubt, and it continued so to be spelt, with occasional variations, until after the family was seated at Arrington. Probably Collins is derived from the same source. The family of Coolidge of Cambridgeshire is the only one in England, that adopted their peculiar way of spelling the name; the corruption being in consequence of there being no fixed mode of spelling in those days, and persons wrote names as they sounded to the ear. In Burke's Dictionary of Arms are several varieties in the spelling of the name, evidently of one common origin, from the similarity of the arms; the griffin being almost always introduced in some form or another, either in the arms or crest.

A review of Bond's book in the January 1868 edition of the Heraldic Journal, published by the founders of the New England Historic Genealogical Society's Committee on Heraldry, agreed that the peculiarity of the name was a strong argument in favor of a connection between the Coolidges of Arrington and those of Watertown. But the editors were totally unwilling to accept that connection as proven. Nevertheless, when Edgar de Valcour Vermont compiled his America Heraldica some two decades later, he uncritically accepted Bond's case for the Watertown Coolidges' right to these arms, even though he acknowledges that exactly the same arms were also borne by the Collynses of Herefordshire, on the other side of England from the supposed Coolidge ancestral home in eastern Cambridgeshire. William Armstrong Crozier followed suit in his 1904 Crozier's General Armory. On the other hand, there seems to be no evidence that either John Coolidge or his descendants ever used these arms during the colonial period, or indeed up to the time that Bond discovered them in the course of his researches. Eugene Zieber, in Heraldry in America, provides no examples of any Coolidge arms--no armorial tombstones, no bookplates, no seals, nothing. Charles Knowles Bolton's meticulously researched American Armory gives only a single example of the arms ascribed by Dr. Bond, on the signet of a lady with an address in Boston's stylish and affluent Back Bay district--an area that was still covered by the tidal waters of the Charles River when Bond's book was published.

Heraldry Comes to the White House

There the matter seems to have lain until Calvin Coolidge unexpectedly became President when Warren G. Harding died suddenly on August 2, 1923. By this time, the revival of interest in heraldry that had begun in the late 19th century was in full bloom. In sharp contrast to the situation a century before, when the suggestion that a politician used a heraldic device was apt to become a political liability, in the 1920s there was no shortage of people who were prepared to tell a new President what his coat of arms was, even if he didn't know he had one and had no intention of using it.

Unlike his Massachusetts predecessors, the two Adamses, Calvin Coolidge seems to have taken his putative armorial heritage in stride. On January 16, 1925, he received a Miss Bettie Carter at the White House, where she presented him with a painting of the arms that had come to be associated with his family.

While she may have been first, however, Miss Carter evidently didn't know much about working the media. Two years later, a painter named Marc Rowe managed to garner a brief period of fame by painting another emblazonment of the Coolidge arms, which he displayed publicly at the annual congress of the Daughters of the American Revolution in Washington and ensured got due notice from the newly-founded Time magazine as well as in America's newspaper of record, The New York Times. As recounted by the latter:

Marc J. Rowe, heraldic artist of Babylon, N.Y.,...today pointed to a peculiar similarity he has discovered in the blazonry of the forebears of the President and of J. P. Morgan. This similarity is the griffin which appears on each, and which Mr. Rowe said was representative of "watchfulness." The colors of the respective coats of arms were different, however. The Coolidge arms display a gold griffin on a green field, with the insignia "Virtute et Fide." "These are very simple arms and the inscription, 'Virtue and Faith,' are in keeping with the President's ideas," said Mr. Rowe. The Coolidge family of centuries ago selected them, he said, and they were brought to the United States about 1600 [sic], or when the first Coolidges settled in Massachusetts. Mr. Rowe said the green was possibly connected in some way with agriculture.

Rowe's explanation of the arms was, of course, comically indicative of a total lack of understanding of heraldry, reflecting the long-discredited notion that specific tinctures and charges always have the same symbolism and origin.

President Coolidge, characteristically, is not known to have had any comment.