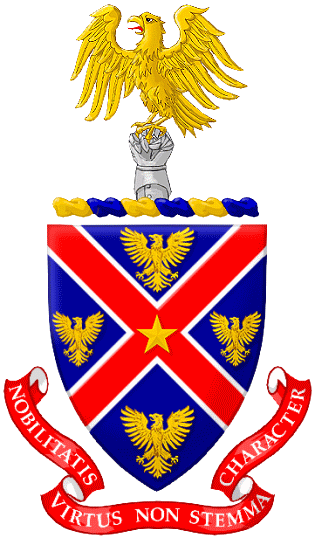 The Arms of Lyndon B. Johnson

Arms: Azure on a saltire Gules fimbriated Argent between four eagles displayed a mullet Or.

Crest: On a wreath of the colors an armed hand Argent supporting an eagle rising Or.

The President and the Self-Styled Heralds

The history of heraldry in the United States includes a number of efforts to establish private organizations that would fill the role played by official institutions in England, Scotland, and elsewhere as a source of recognized arms. One that gained a significant degree of public attention for a short period of time was the American College of Heraldry and Arms, Inc., established by four well-to-do Baltimoreans in 1966.

Certificate of "Grant"
Courtesy of Lyndon B. Johnson Presidential Library

The college was able to establish a high profile relatively quickly, apparently leveraging its founders’ political connections to arrange for prominent public officials to accept its “grants” of arms. Its notoriety reached its zenith on June 1, 1968, when Donald Franklin Stewart, “Chief Herald Marshall” [sic], presented a grant of arms to President Lyndon Johnson at an audience in the Oval Office. U.S. Senator Daniel Brewster (D-Md.), who presumably arranged the meeting, was in attendance.

The arms presented to Johnson were described by the college in two different ways. The hand lettered and illustrated certificate presented to the President—evidently prepared by students from the prestigious Maryland Institute College of Art—blazoned the arms as On a shield azure, a saltire gules, surmounted by a mullet or, and four eagles, Chief point, Dexter flank, Sinister flank, and Base point, displayed or. However, a separate typed explanation of the arms signed by Stewart said On a shield azure a saltire gules, bordure argent surmounted by a mullet or. Four eagles displayed or. Neither of these is an accurate blazon of the arms as depicted on the document--or even a correct heraldic blazon at all. The arms as depicted on the grant are better described as Azure on a saltire Gules fimbriated Argent between four eagles displayed a mullet Or.

The crest was described as An armed hand argent, supporting an eagle displayed or. The motto was Nobilitatis virtus non stemma character, translated as “Virtue, not lineage, is the mark of nobility.”

In addition, President Johnson was granted two American bald eagles as supporters in right of his office as President, with the proviso that the supporters could not be inherited by his descendants. The arms were depicted with the Silver Star awarded during World War II to then-Lieutenant Commander Lyndon B. Johnson, USNR, suspended beneath the shield.

Unfortunately, the gift of arms so graciously accepted by President Johnson never seems to have been as graciously displayed. We are aware of no evidence that Johnson ever used the arms for any purpose, and the documents presented at the granting ceremony were simply transferred to his Presidential library at The University of Texas following his term, along with the huge amounts of similar memorabilia accumulated by any President in the line of duty.

Any attention garnered by the American College of Heraldry and Arms as a result of its presentation to President Johnson was evidently not enough to keep it in operation. The college went out of business in 1970, although not before granting arms to Maryland Governor (and later Vice President) Spiro Agnew in 1968 and President Richard M. Nixon in 1970. The present-day American College of Heraldry, founded in 1972, has no connection with this earlier body.