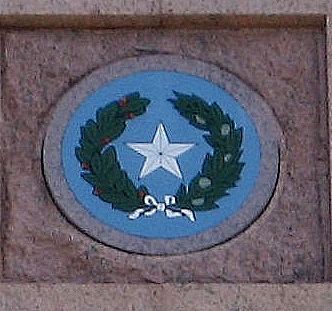 Arms of the Republic of Texas
Texas State Capitol, Austin

Texas is well known for the flags of six separate nations that have flown over it in the past 500 years. But with each change in sovereignty, more than a flag has changed; each new country had its own coat of arms or seal as well.

A timeline of sovereignty over Texas is as follows:

As part of Mexico, Texas was coupled with Coahuila as the single state of Coahuila y Texas. A Mexican officer's account of the siege and battle of the Alamo in 1836 records that the pro-independence forces used a tricolor flag of green, white, and red (the Mexican colors) with two stars on the white stripe, presumably representing these two components of the state. With its separation from Coahuila, Texas is said to have chosen to retain a single or "lone" five-pointed star to represent it as an independent republic. Whether or not that is true, it is certain that the lone star was purposely chosen as a reminder of Texas's struggle for independence, which it fought for and won alone. The star no doubt also signified a desired connection to the United States, which was the ultimate goal of a majority of Texans from the very beginning. To this day a single star can be found on the flag and seal of the "Lone Star State."

With its new sovereignty, official emblems of the authority of the new national government was needed. On January 25, 1839, the Congress of the Republic of Texas adopted legislation that established the official symbols of the republic: the flag (still in use today), the great seal, and the coat of arms--a white star of five points on an azure ground encircled by olive and live oak branches. 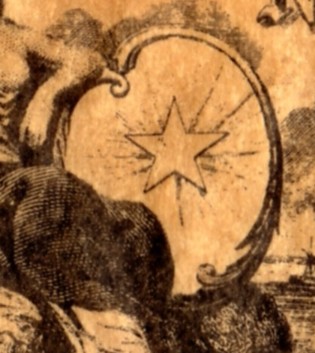 This act established the essential symbols that have represented Texas throughout nationhood and statehood. The star is an obvious choice, and while the arms of the United States also feature an olive branch, the seal of the Republic of Mexico at that time contained both oak and olive branches. The great seal of the Republic of Texas consisted of the coat of arms on a disk surrounded by the inscription "Republic of Texas." A variation of the arms was used on the nation’s $3 bill, without the live oak and olive branches. 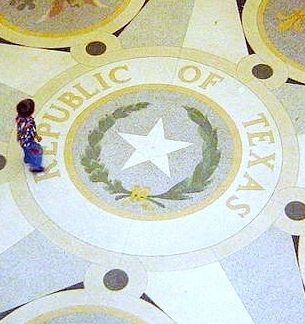 Upon its admission to the union on December 29, 1845 the national flag became the state flag and the national seal became the state seal with the wording changed to The State of Texas. The short lived nation had a short lived coat of arms, however, as a state coat of arms was not adopted and nearly 150 years would pass before a coat of arms would be seen again. However, with the construction of the new state capitol building in the late 1880’s, the government showed that the arms of the Republic of Texas were not forgotten, featuring them in the architecture throughout exterior (see top of page) and interior of the new building.

The Semi-Armorial Reverse of the State Seal

Reverse of the Texas State Seal

The design consisted of a shield in three parts with images taken from the Texas War of Independence in depictions reminiscent of Georgian landscape heraldry. On the top half of the shield is the Alamo. The bottom half is split between an image of the “Come And Take It” cannon from the Battle at Gonzales, and an image of Vince’s Bridge from the final Battle of San Jacinto. The outer elements include a silver "lone star" crest floating above the shield, in allusion to the glory or "new constellation" of 13 stars that serves as the floating crest in the arms of the United States. The live oak and olive branches, as well as all six national flags that have flown over Texas, are displayed about the shield in a manner reminiscent of Latin American heraldic practice. Two motto scrolls, inscribed "Remember The Alamo" and "Texas One And Indivisible," are also a part of the design. Because this emblem is armorial in form, it might easily be taken for the coat of arms of the State of Texas. But it isn’t. That would come later.

By the 1980’s the Texas government had greatly outgrown its capitol building and along with a remodeling of the original building, a vast underground extension was added. The rotunda of the new capitol extension was to include a terrazzo mosaic of the reverse image of the state seal, but with no official blazon, the legislature saw the need to establish a formal description before literally setting it in stone. The 72nd Legislature adopted a description standardizing the image, which the governor approved on June 14, 1991:

RESOLVED, That the design for the reverse side of the Great Seal of Texas shall consist of a shield, the lower half of which is divided into two parts; on the shield's lower left is a depiction of the cannon of the Battle at Gonzales; on the shield's lower right is a depiction of Vince's Bridge; on the upper half of the shield is a depiction of the Alamo; the shield is circled by live oak and olive branches, and the unfurled flags of the Kingdom of France, the Kingdom of Spain, the United Mexican States, the Republic of Texas, the Confederate States of America, and the United States of America; above the shield is emblazoned the motto, "REMEMBER THE ALAMO", and beneath the shield are the words, "TEXAS ONE AND INDIVISIBLE"; over the entire shield, centered between the flags, is a white five-pointed star... 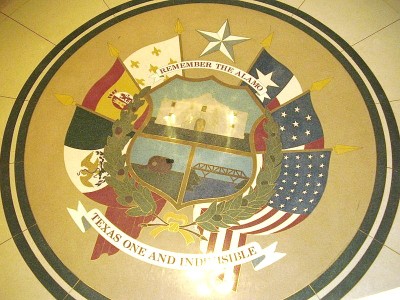 Adoption of a State "Coat of Arms"

Shortly afterward, in 1992, a standard design of the state seal was also established and officially adopted. In conjunction with that act, the star and the live oak and olive branches which were the original charges of the coat of arms of the Republic of Texas, were recognized as the most basic elements of Texas identity and were themselves, with no shield or background of any kind, officially designated for the first time as the "coat of arms" of the State of Texas. 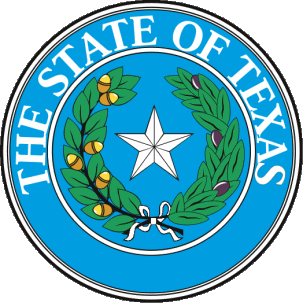 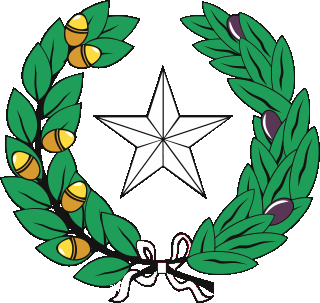