Heraldic Registration in the United States

It is perfectly legal for anyone in the United States to design and adopt an original coat of arms of his or her choice. Not only is there is no legal prohibition against armorial assumption in the United States, but the freedom of the individual to assume arms has also been a time-honored principle observed in most of the Western world ever since the great 14th century legal scholar Bartolo de Sassoferrato listed it as one of the valid ways of acquiring arms. It is only within a few jurisdictions, particularly England and Scotland, that any laws exist against the assumption of arms. These laws have not been applicable in the United States since the attainment of American independence—supposing they were even applicable in the American colonies before that. Thus, under American law, assumed arms enjoy the same validity as those granted by the English College of Arms, Scotland's Lord Lyon, or any other foreign authority.

In some countries, assumed arms can be legally protected against usurpation by putting them on the public record in some fashion. This is often done by registering them with a recognized heraldic society or even simply by executing a unilateral legal document witnessed and sealed by a notary. (A country-by-country guide can be found at Foreign Armorial Grants and Registrations for Americans.) Generally speaking, this is not the case in the United States, where there are no statutes providing for the protection of armorial bearings (other than those registered as trademarks or as organizational insignia under state or federal law) and an insufficient record of jurisprudence on the subject to provide any meaningful judicial precedent. Of course, the same lack of legal protection applies in the United States to arms granted by the English kings of arms or other foreign heralds as to those assumed by private initiative.

Why Would I Register My Arms?

Many Americans who have designed and assumed their own arms, or inherited arms traditionally used by their families, find it desirable to put their arms on the record in some fashion. There are several reasons someone might want to do this despite the lack of clear legal protection:

Why Not Trademark or Copyright My Arms?

Many people ask why they cannot protect their arms in the United States under either the copyright or trademark laws.

There are several problems with relying on copyright to protect armorial bearings. First of all, U.S. courts have consistently held that copyright to a work of art subsists only in the specific rendering, not to the general idea of what is depicted. An artist may hold the copyright to a painting of a blue shield with a golden deer jumping over a silver log, but this does not prevent another artist from painting the same scene in a different style. Thus, a specific emblazonment of a coat of arms may be copyrighted, but that will not prevent another artist from emblazoning the same arms with a different shape of shield, a different rendering of any animals in the design, changing the helm, changing the mantling, or any other alteration that a court might find substantial enough to constitute a new work of art. Even a slight difference might suffice in the eyes of a court. Some have suggested that perhaps the blazon could be copyrighted, but what is subject to copyright is a new creative work, and the courts have found that a basic description of a creative work is not necessarily creative in itself. In any case, there is sufficient flexibility in how arms are blazoned that it would be easy to evade any protection offered by asserting copyright in the blazon.

Even if it were possible to copyright the general idea of a particular coat of arms, and extend that protection to all derivative depictions of the same arms, one would still have to show that the design of the arms required creative effort. This would not apply to arms inherited from ancestors, or to arms granted by foreign sources. Other issues include the fact that copyrights can be bought and sold; customarily personal arms cannot. Finally, copyright in any work exists for only a limited time. While recent legislation has extended the duration of copyright, it eventually expires. But the main thing that distinguishes personal armorial bearings from other symbols is that they are indefinitely hereditary in the same family.

It is possible to register one's arms as a trademark under state or federal law. The problem here is that a registered trademark is valid only if it is actually used in one's trade or profession. Most armigers do not intend to use their arms for that purpose. Moreover, the same problems concerning the extent to which a design must be altered to constitute a different design arise in the trademark area as well; a court adjudicating a case will not be likely to ask whether the marks are sufficiently differenced under the law of arms but whether a reasonable consumer, seeing the two emblazonments, is likely to confuse one with the other. Even if the arms are used in business, once they are registered as the trademark they are typically tied to the business. If the business is sold, the trademark usually goes to the new owner. Thus, if a business owner has registered his arms as the trademark of his company, and he dies and the company is bought out as part of the estate settlement, his children may find that they have no right to their hereditary arms.

Where Can I Register My Arms?

It is possible under the laws of some states to register the insignia of non-profit associations with specified agencies of the state government, usually the office of the secretary of state. It is then unlawful for others to use such registered insignia without the approval of the registrant. Some members of the American Heraldry Society have registered their arms under these as the insignia of, for example, "The Society of Descendants of Ephraim Wilson of Doeville, California." In principle, such a registration should provide legal protection against usurpation, although we are not aware of any instances where the matter has been tested in court. The fees, term for which the registration is valid, and other specifics vary from state to state, so check the statutes of your state of residence if you are interested in pursuing this form of registration. (Note that this does not provide all the benefits of expert review, publication, etc., offered by registration with a heraldic society.)

We are aware of four organizations in the United States that maintain registries of personal coats of arms, listed below in the order in which they were established. Information on pricing is current as best we were able to determine as of the dates indicated in each entry. Check directly with the organization concerned for current information. 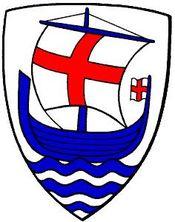 The New England Historic Genealogical Society, founded in 1845, established its Committee on Heraldry in 1864. The Committee, which is the oldest non-governmental heraldic organization in the world, registers or records arms “rightfully borne” within the United States and by U.S. citizens abroad. The committee accepts applications in four categories:

Arms in the other three categories are “recorded,” not “registered.” These include:

Arms registered with the Committee (i.e., those in the first category, arms of foreign origin dating to before 1917) are periodically published in the New England Historical and Genealogical Register, then subsequently collected and printed in booklets (10 thus far) under the title A Roll of Arms, Registered by the Committee on Heraldry of the New England Historical Genealogical Society. In 2013 the NEHGS published a collected edition of the entire roll.

The Committee on Heraldry currently charges $200 for registering or recording a coat of arms in any of the categories above. This covers only the costs of defraying the Committee’s operating expenses; no certificate of registration or emblazonment of the arms is provided. More information and instructions for contacting the Committee are available on its website.

The Augustan Society, an association now based in Orlando, Florida, and devoted to research on historic, genealogical, heraldic, and chivalric matters, was organized in 1957 and began registering arms in 1966. Both members and non-members of the society may register personal as well as institutional coats of arms, banners, and badges, whether for themselves or on behalf of an ancestor. The basic fee as of February 2010 is $150.00 ($120.00 for Augustan Society members). If multiple items are registered simultaneously, such as arms and a badge, cost adjustments are applicable.

After approval and registration, the petitioner will receive a certificate with a new illustration of the arms. Beginning in 1967-68, the society has occasionally issued printed installments of The Augustan Society Roll of Arms, in which selected arms from the society’s registry are included. The most recent installment (the fourth) was published in 1986. Registering arms with the Augustan Society does not guarantee that they will be published in the Roll of Arms.

Applications for registration may be requested from The Augustan Society, Inc., P.O. Box 771267, Orlando, FL 32877-1267 or by e-mail. For further details and contact information, see the Augustan Society’s website. 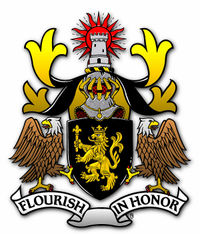 The American College of Heraldry was founded in 1972 and subsequently chartered as a non-profit corporation. The college registers personal and organizational arms, including those granted or certified by foreign heraldic authorities, those borne historically by families without having been granted by an official authority, as well as newly designed and assumed arms. Registration with the College is limited to U.S. citizens or residents and those with significant business or personal connections in the United States.

The College’s basic registration fee, as of early 2015, is $325, or $350 if combined with membership in the College. Registrants receive a certificate of registration and a black-and-white line drawing of the arms suitable for duplication. In addition, for those requiring it, the registration fee includes assistance with the design and blazoning of a new coat of arms.

Arms registered with the ACH are published in the organization’s quarterly journal, The Armiger’s News, and periodically collected and printed in book form as The Heraldic Register of America.

Further information and application forms for registration can be found on the American College of Heraldry website. The College's executive director is David Robert Wooten. 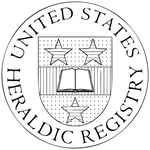 The United States Heraldic Registry was established in 2005 to provide free on-line registration of inherited, granted, or assumed arms in the United States. Registration is available to individuals, private organizations, other corporate bodies, and local, state, and federal government entities. The Registry publishes an online database of registered coats of arms which can be searched using names and blazon keywords. For a modest fee, registrants may order a computer-generated certificate of registration. The Registry also offers heraldic design assistance.

The United States Heraldic Registry was founded by Michael Swanson and its operation was taken over in 2014 by Philip Blanton. For further information, see the Registry's website.