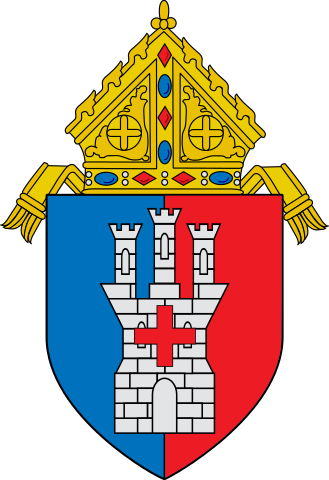 A Distinctively American Coat by a Noted American Designer

The Society's 2010 Design Award was presented to the Roman Catholic Diocese of Toledo, Ohio. Designed by the noted American heraldist Pierre de Chaignon la Rose in 1912, the arms were blazoned by him as ''Per pale azure and gules, a tower triply-turretted the central turret the tallest argent charged with a cross-humetty of the second.''

Writing in the American Ecclesiastical Review that year, La Rose explained that "The arms of the See are based upon those of Toledo in Spain, which bears this silver tower on a plain red field. By changing the field to one half of blue and one-half of red, I have sufficiently differenced the arms from the original, and have effected, in conjunction with the silver tower, a combination of red, white, and blue—-a new and distinctively American Toledo coat. And the tower I have marked with a red cross to indicate that the new Toledo is to be ever a Catholic stronghold."

The arms designed by La Rose were adopted by the diocese two years after its creation in 1910 from counties formerly under the Diocese of Cleveland and the appointment of the first bishop, the Rt. Rev. Joseph Schrembs, D.D., a Bavarian immigrant. Toledo has been home to a sizeable Catholic population since the 1830s, when German and Irish immigrants first came to the port.

In recognition of his distinguished contributions, the Society's design award has been named in honor of Pierre de Chaignon la Rose beginning in 2013. It is awarded annually to an American academic, corporate, military, civic, or social organization whose armorial bearings exemplify the best in heraldic design.

Information about the Diocese of Toledo can be found at http://www.toledodiocese.org/.