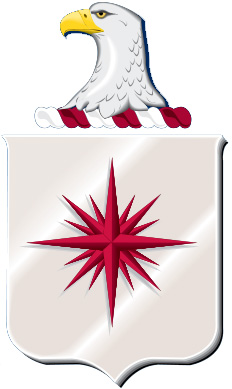 Formally assigned by President Harry S. Truman in a February 1950 executive order, the arms are blazoned Argent, a compass rose of sixteen points gules, and for a crest on a wreath argent and gules an American bald eagle's head erased.

The agency considers the shield as “the standard symbol of defense and the intelligence [it] gather[s] for policymakers”, while the “radiating spokes of the compass rose depict the convergence of intelligence data from all areas of the world to a central point.” Finally, the crest’s use of the national bird “is a symbol of strength and alertness.” The designer is unknown, but was likely the U.S. Army Institute of Heraldry.

The Society’s Design Award is now awarded annually for excellence in heraldic design. The award is given to an American academic, corporate, military, civic, or social organization whose armorial bearing exemplify the best in heraldic design. Armorial designs are nominated by the Society’s membership to the Board of Governors. The Board narrows the field to three candidates, and the members then select the final, winning design. Beginning in 2009, it will also be given in a personal category to an individual whose arms meet the design standard.

Information about the Central Intelligence Agency can be found at https://www.cia.gov.